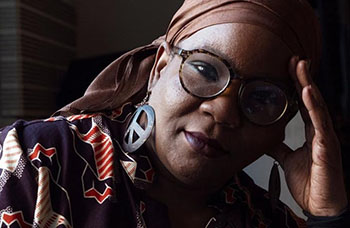 Kaba aims to change the national conversation around “racialized and gendered systems of violence organized through the prison industrial complex (PIC), which includes prisons, policing, and surveillance.” She said that she was moved to fight for abolition “when I realized that prison in fact normalizes and reproduces violence rather than ending it.”

Kaba, an educator, organizer, author, and activist, is the founder and director of Project NIA, which works to end youth incarceration. She is also a researcher at Interrupting Criminalization: Research in Action at the Barnard Center for Research on Women, a project she cofounded with police misconduct attorney and organizer Andrea Ritchie in 2018.

The convocation had an unprecedented all-virtual format because of COVID-19, which served as a jumping-off point for Kaba’s lecture and dialogue with Associate Feminist Studies Professor Gina Dent.

“Those of us here today have survived 2020, a year defined by a global pandemic and expanding economic crisis and some of the largest racial justice protests the U.S. has ever seen,’’ Kaba said. “What a time to be alive, as the young folks like to say.”

During her lecture, Kaba traced her activism to uproot racialized violence back to when she was a teenager living in New York City. But she emphasized that her mission was not just about dismantling the PIC. It was also about “helping local communities targeted by the [PIC] to be stronger, healthier, and more self-determined. I’m a PIC abolitionist because I want to dismantle a system predicated on death, and to build one focused on life and safety.”

Much of her lecture emphasized the importance of creating, building up, and maintaining “a world where we have everything we need: food, shelter, education, health, art, beauty, clean air, and more; as an abolitionist, I’m trying to prefigure the world in which I want to live. Our work isn’t just a movement against cages and cops. It’s a movement for different ways of living together.”

In her remarks, Kaba referenced the legacy and impact of Martin Luther King Jr., lingering in King’s spirit of mutual aid during the Montgomery Bus Boycott from December 5, 1955, to December 20, 1956.

In 1956, Montgomery police arrested King on the grounds that he had been—just barely—speeding, going a measly five miles over the speed limit.

“He knew the real reason he had been harassed was he had been using his car to help participants in the boycott,” Kaba said. During his time in solitary confinement, he penned his famous “Letter From a Birmingham Jail.”

Kaba used that  painstakingly organized “carpool or rideshare system, which brought an end to the segregated bus system in Montgomery,” as a shining example of the mutual aid needed in the fight against the PIC.

“I share this example … because people don’t make the connection between the boycott and mutual aid,” a term that keeps coming up in news stories over the past year or so, when self-determination helped communities survive the pandemic and stand up to anti-Black violence.

“When cities locked down this spring across the world, people took it upon themselves to deliver groceries to the elderly and immunocompromised,’’ Kaba noted. “Organizers stocked networks of fridges and pantries with free food and distributed hand sanitizers.… In June, during a protest against police brutality, volunteers handed out water, warm food, masks, and massages. A few weeks later during the West Coast wildfires, mutual aid groups handed out water and offered free food to firefighters [and fire victims].”

That same spirit of “cooperation for the sake of good [and] creating reciprocal relationships with care” can also help abolitionist activists prevail in the long term, she said. “The key things to remember about mutual aid is it empowers communities to meet needs like housing, healthcare, food, and transportation. It is premised on solidarity, not charity. It rejects saviorism, hierarchy, and authoritarianism. Mutual aid exposes the failures of the current system and shows an alternative.”

Kaba emphasizes that the fight for justice is a collective struggle. When skeptics suggest that “marching … doesn’t accomplish anything,” Kaba is quick to remind them that the Civil Rights Act of 1964 happened in the wake of mass demonstrations against racism.

“So make sure that you find your people, that you work with others to change the world,” she said. “Don’t be a lone ranger!”

After her remarks, Kaba had a dialogue with Professor Dent, who praised her work.

“I want to tell you how proud and happy I am to have you with us,” Dent said. “You are always an incredible organizer.”

Dent noted that Santa Cruz and the Bay Area are important places for the development of the prison abolition movement. She praised Kaba for the advocacy work she has done on behalf of more than 100 Black men who were subjected to torture by police to extract confessions. Kaba has advocated for reparations for the torture survivors.

“The reason I’m asking about this is because many people are looking for the kinds of [advocacy work] you are providing for us tonight,” Dent said. “These examples show us what we can do now. Abolition isn’t something in the future. Abolition is something we’re living now and working on.”

Kaba has cofounded multiple other organizations and projects over the years including We Charge Genocide, the Chicago Freedom School, the Chicago Taskforce on Violence against Girls and Young Women, Love & Protect, the Just Practice Collaborative, and Survived & Punished. She is a member of the Movement for Black Lives Policy Table.

Kaba offers a radical analysis that influences how people think and respond to how violence, prisons, and policing affect the lives of people of color.

She is the author of Missing Daddy, in which a child narrator explores the emotions she feels surrounding her father’s incarceration. Her forthcoming book, We Do This ‘Til We Free Us: Abolitionist Organizing and Transforming Justice, will be published this month.