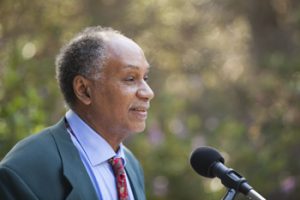 Humanities Dean Tyler Stovall was featured in a Time Magazine post-election story that asked eight historians to weigh in on one question: “When historians of the future look back on this week, what do you think they will see?”

Tyler Stovall, Distinguished Professor of History at University of California Santa Cruz and President-elect of the American Historical Association:

For me, the election of Donald Trump underscores the Brexit vote in the U.K. earlier this year; both represent a profound anger at globalization by those who see themselves as its losers, and mixed in with that is a substantial amount of xenophobia and racism. I think historians of the future will think of this as a major turning point in not only how America adapts to a more globalized economy, but equally what this will have said about our democratic political system. This of course will all depend on how the future transpires in general, and what the Trump administration achieves in particular. I also think many historians will see this as a major example of resistance to a more multicultural America, perhaps akin to the suppression of Reconstruction in the South after the Civil War. Perhaps the most astute will consider how these two primary questions, diversity and the resistance to globalized economic inequality, have shaped and will continue to shape contemporary America.