What does it mean to be human during a major biological crisis like the coronavirus pandemic? To see all of our economic, social and cultural achievements and challenges suddenly take a back seat to the sheer physical fact of disease, contagion and death? What can the humanities — the study of what it means to be human — offer to help us survive such trauma?

In this time, the humanities, and history and literature in particular, offer important insights into how people have dealt with the trauma of pandemics in the past, and how to make sense of a world now in many ways beyond our control.

If history illustrates the effect of pandemics on whole communities, then literature gives us a more intimate view.

When we consider the changes, both short and long term, that the coronavirus may bring for us, we should remember that the world we know today was shaped by the pandemics of the past. This realization can help us cope with these difficult days.

The pandemic commonly known as the Black Death devastated Asia, Europe and North Africa between 1347 and 1351, shaping human history for centuries. Communities throughout Europe lost half their populations, and it took more than 100 years to recover.

This enormous biological crisis also prompted fundamental social and cultural changes. For example, the shortage of labor it created helped bring about the end of serfdom and create a free peasantry that could bargain for wages, so that death and freedom marched together.

The European conquest of the New World in the 16th century largely was aided by pandemic. When Spanish conquistadores landed in Veracruz, Mexico, in 1520 they brought not only guns and gold but also smallpox, which within a year ran rampant in the Aztec empire. Diseases brought to the Americas by Spanish explorers wiped out as much as 90% of the indigenous population.

The global flu pandemic of 1918-1919 overlapped with (and killed more people than) World War I. As diplomats gathered in Paris to make the peace in 1919, they struggled to remake a world whose essential unity had been underscored by one of the greatest pandemics in human history.

Literature takes us beyond statistics of global deaths and degree of spread to show how the crisis has affected the individual lives of those infected as well as their friends, families and neighbors. As several cultural commentators have noted in the last few weeks, there has been a sharp uptick in the popularity of literary works dealing with plagues, epidemics and other forms of biological crises.

I’ve listed below a few novels and stories, from the past to today, that explore the impact of pandemics on humanity. Doubtless you can add your own favorite works, and I encourage you to do so. Hopefully, they will serve as a resource and as an inspiration as you negotiate these difficult days with your family and friends, a reminder that even the hardest times can prompt and illustrate the triumph of the human spirit.

Giovanni Boccaccio, The Decameron (1353): The granddaddy of pandemic fiction, The Decameron relates tales told by refugees from the Black Death in 14th century Florence.

Daniel Defoe, A Journal of the Plague Year (1722): The Plague Year gives a literary and historical account of the bubonic plague in 17th century London.

Albert Camus, The Plague (1947): A novel about the plague in French-ruled Algeria after World War II, often seen as a metaphor for everything from Nazism to colonialism and the existential crisis of the human spirit.

Kenzaburo Oe, Nip the Buds, Shoot the Kids (1958): The story of a group of reform school boys sent to a plague-stricken Japanese village during World War II.

Octavia E. Butler, Survivor (1978): A novel about the survivors of a widespread plague on Earth who settle on another planet.

Gabriel García Marquez, Love in the Time of Cholera (1985): A novel by the great Colombian writer that explores analogies of love, passion and disease.

Margaret Atwood, Oryx and Crake (2003) and The Year of the Flood (2009): The first two novels of the MaddAdam trilogy, they explore how women and men adjusted to a world torn apart by disaster.

Philip Roth, Nemesis (2010): A novel about the impact of the 1944 polio epidemic on a Jewish neighborhood in Newark, N.J.

Colson Whitehead, Zone One (2011): A portrait of New York City as a post-apocalyptic dystopia infected by a plague that turns its inhabitants into zombies.

And, finally, for sheer unadulterated creepiness as well as a powerful statement about pandemics and social justice, it’s hard to beat Edgar Allan Poe’s short story, “The Masque of the Red Death” (1842).

What can such literature teach us about the effect of these deadly manifestations on humanity, and how they shape what it means to be human? We are the stories we tell, and in a time of pandemic these stories show how we will live through this crisis and, ultimately, build a brighter tomorrow.

Be well and stay safe. 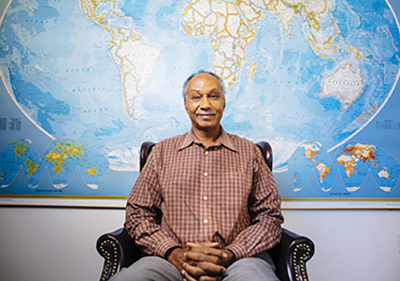 Tyler Stovall is a Distinguished Professor of History and the Dean of the Humanities Division at UC Santa Cruz. An expert in French history, Stovall is the immediate past president-elect of the American Historical Association, the largest professional organization in the country devoted to the study of history. In 2016 he was featured in a Time magazine story titled “25 Moments That Changed America.”

This article originally appeared in the San Francisco Chronicle on May 20, 2020. Reprinted here with permission.