By J.D. Hillard for UCSC Giving

A gift from Andrew Baird, a former student of pioneering History of Consciousness Professor Hayden White, has endowed an annual lecture honoring White and his work. 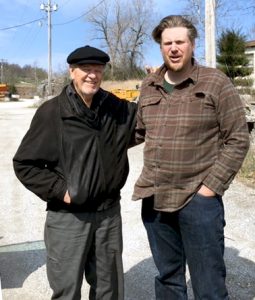 Beginning in 2020 a new annual lecture series will honor the late Professor Hayden White by highlighting the work of researchers who share his creativity and rigor.

The lectures will be funded indefinitely thanks to an endowment established by a gift from a friend and former student of White’s, Andrew Baird (Ph.D. ’03, history of consciousness). Baird said the lectures will be exactly the kind of event his mentor would have appreciated.

“More than everything else, what he liked was to have an occasion for people to come together to hear good work that they wouldn’t otherwise be exposed to,” Baird said. “He thought that it was an important part of education and a good life to expose yourself to new ideas and always be thinking.”

Hayden White earned international recognition for calling various forms and practices of historians into question. His most well-known work, Metahistory: The Historical Imagination in Nineteenth-Century Europe, challenged the assumption that history could be objective and influenced researchers in many disciplines of the humanities.

White was instrumental in building UC Santa Cruz’s History of Consciousness Department into a unique program in which students and researchers explore the boundaries and underlying theories of academic traditions.

The Hayden V. White Distinguished Annual Lecture Series will be hosted by The Humanities Institute. THI is also home to the Hayden White Endowment in Historical and Cultural Theory, which supports student work in these areas as well as conferences and seminars.

History Professor Nathaniel Deutsch, faculty director of THI, said speakers invited to the lectures will exemplify White’s innovative spirit and his penchant for meticulousness. That combination of imagination and rigor is what makes UC Santa Cruz research distinctive, he said.

Deutsch praised Baird for ensuring White’s intellectual legacy will continue year after year through the lectures.

“We wouldn’t be able to have the lecture without the gift,” he said. “So the gift is really transformative.”

White chaired Baird’s dissertation committee, and the two remained close years after Baird earned his degree and returned to his family business, a rock quarry and building materials company in Missouri.

The business wasn’t the only thing passed down in the family. Baird’s father was also a humanities scholar—focused on the work of German philosopher Martin Heidegger—before taking charge of the company.

“It’s not like a fast-paced start-up,” Baird says. “You have to have something else to think about.”

For Baird, White provided an example of leadership and how to comport oneself while questioning assumed knowledge.

“A lot of people will take things for granted when the reasons they are that way aren’t great,” Baird says. “He set an example of challenging the assumptions people aren’t discussing, and that is valuable in academia and in business.”

The Hayden White Lectures will join the institute’s calendar of high-profile public offerings:

The UC Regents named White a University Professor, recognizing his achievements not just as a researcher but also as a teacher. Humanities Institute Managing Director Irena Polic notes Baird’s gift highlights the impact White had on his students.

“It is clear that Hayden meant a great deal to Andrew,” Polic says. “It is really wonderful to see a student honor their teacher in such a generous and meaningful way.”

Deutsch and a committee of humanities faculty have begun considering speakers. The date of the first event has yet to be determined.

This article was originally published in UCSC Giving.