This year, Dr. Camilla Hawthorne is a co-principal investigator leading “Border Regimes and Resistance in Global Perspective” – one of THI’s year-long research clusters dedicated to engaging with the theme of Memory. 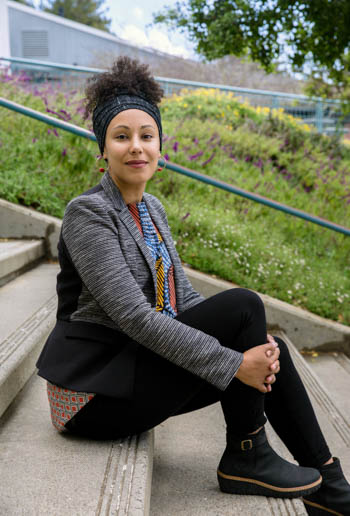 Hawthorne has been traveling between California and Italy since she was a child, and her research requires her to stay deeply connected to political developments happening on the ground in Italy.

Italy’s most widely read newspaper, Corriere della Sera, released its year-end list of the world’s top women of 2020, and UC Santa Cruz assistant professor of sociology Camilla Hawthorne made the list at number 20 for her highly influential research into the Black diaspora across Italy and the Mediterranean.

As a refugee crisis and economic disparities fuel immigration to the Mediterranean from Africa, Hawthorne has shed light on emergent Afro-Italian identities and the activism of Italian-born children of immigrants who are fighting to reform the country’s restrictive citizenship laws. Corriere della Sera praised her work as an insightful “reflection on space,” which documents the ways in which Black geographies transcend national borders.

Hawthorne, the daughter of an Italian mother and an African American father, has been traveling between California and Italy since she was a child, and her research requires her to stay deeply connected to political developments happening on the ground in Italy. But since the start of the coronavirus pandemic, she’s had to curtail her usual travels. The recognition from Corriere della Sera came at the perfect time to lift Hawthorne’s spirits with a reminder that she is an important part of the community, even from afar.

“I’m really grateful to have this recognition that my work is having an impact in Italy, and I hope that it’s one way of keeping that connection alive,” she said.

And Hawthorne has still been keeping close tabs on current events in Italy, particularly the Black Lives Matter protests that erupted over the summer. She said this movement showed how Afro-Italian activists have been addressing the very specific forms of racism that arise from Italy’s history while also connecting their efforts with struggles taking place around the globe.

“There were hundreds and thousands of activists pouring into the streets across Italy in these efforts led by Black Italians,” she said. “They were both expressing solidarity with the United States and translating this to the Italian context as a way to think about the ways that Black youth are disenfranchised and the ways that Black migrant laborers are exploited in the agricultural fields of Southern Italy.”

Hawthorne has been studying Black Italian political mobilizations for almost a decade and is currently wrapping up a major manuscript documenting her findings. She also worked with an international research collective on a book coming out this spring that will explore the larger human geography of the Black Mediterranean and trace the trends driving the region’s refugee crisis. The history of migration from Africa to the Mediterranean is fraught with border fortification and other forms of anti-immigrant violence, Hawthorne says, and colonialism also shapes “both the repertoires of racism and the modalities of resistance” within these countries.

She hopes that scholars and activists based in the United States who read her work will recognize the importance of how social and political forces at work in the Mediterranean also manifest themselves much closer to home.

“Italy shows us in very, very vivid ways how racism and border violence and colonialism are all deeply interconnected,” she said. “One of the most powerful things the Black Mediterranean shows us is that any mobilization for racial justice, and any mobilization to defend Black lives, has to take justice for immigrants seriously, and it has to take colonialism seriously.”