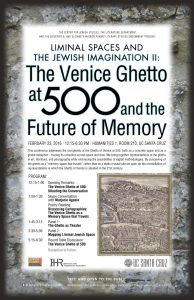 The Center for Jewish Studies at UC Santa Cruz will present a one-day conference, The Venice Ghetto at 500 and the Future of Memory, on campus February 23, at the Humanities 1 Building.

The conference will address the complexity of the Ghetto of Venice as it marks its 500th anniversary–both as an actual physical space and as a global metaphor–tracing its path and significance across space and time.

“The Venice Ghetto represents the first instance of the word “ghetto” being used in the world, and it has come to mean spaces of segregation,” noted Katie Trostel, a UC Santa Cruz graduate student in literature, who is coordinating the conference. “That all stems from the Jewish term in Venice.”

“Ghetto is an Italian word that means foundry,” she added. “It refers to the space in which Jews were forced to live in, beginning in 1516. It was actually the site of an abandoned metal foundry.”

Presenters at the conference will bring together…