UC Santa Cruz Professor Emerita of Literature Earns High Praise for I, Hotel in The Nation 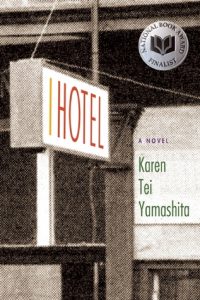 Karen Tei Yamashita, Professor of Literature and Creative Writing at UC Santa Cruz, published I, Hotel in 2010. The novel, one of seven books she has produced in her active writing life, gained a National Book Award nomination the year it was released.

For The Nation, Lucas Iberico Lozada writes this month about Yamashita’s “epic tale of San Francisco’s Asian American movement,” in an article about the politics of the novel as well as its literary force:

I Hotel’s scope—not to mention its sheer size, at just over 600 pages—marks it as a project of epic proportions. But the book’s power is in large part derived from the way in which each of the 10 novellas feels self-contained while resonating with the larger story of the historical moment.

A beloved member of the UC Santa Cruz Humanities community, Yamashita was named a Fellow of United States Artists in 2011, and in 2013 she was co-appointed with Bettina Aptheker as the UC Presidential Chair in Feminist Critical Race and Ethnic Studies at UC Santa Cruz.

Congratulations to Karen Tei Yamashita for the ongoing success of her novel I, Hotel. Read Lozada’s full write up at The Nation, here.