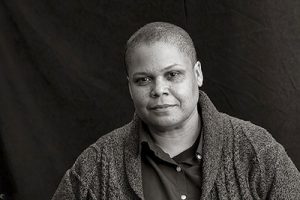 The Humanities Institute and the Center for Creative Ecologies at UC Santa Cruz will launch the Beyond the End of the World lecture series with award-winning author Keeanga-Yamahtta Taylor, on January 23, at the Music Center Recital Hall.

Taylor writes and speaks about Black politics, social movements, and racial inequality in the United States. She is the author of From #BlackLivesMatter to Black Liberation, winner of the 2016 Lannan Cultural Freedom Award for an Especially Notable Book, which honors nonfiction works of particular relevance to the current historical moment.

Harvard professor and social critic Cornel West has described the book as “brilliant…the best analysis we have of the #BlackLivesMatter moment of the long struggle for freedom in America,” adding that “Keeanga-Yamahtta Taylor has emerged as the most sophisticated and courageous radical intellectual of her generation.”

And The Guardian noted: “Taylor, a professor of African American studies at Princeton, is the rare academic writer whose sense of humor is as sharp as her scholarship.”

The Beyond the End of the World lecture series is part of a year-long research and exhibition project led by UCSC arts professor T. J. Demos, director of the Center for Creative Ecologies. The goal is to bring leading international thinkers and cultural practitioners to UC Santa Cruz to discuss what lies beyond dystopian catastrophism, and how we can cultivate radical futures of justice, equality, and a healthy environment.

“I’m really excited that Keeanga is our inaugural speaker,” said Demos. “It’s because she speaks so forcefully about a politics of liberation that transcends social and identitarian difference. She draws on and embraces a radical conception of intersectionality in her work. It not only addresses current socio-political concerns–for example, the pathologies of Trumpism–with all sorts of critical insights, but also provides vital resources and exactly what we’ll need to survive the divisive dystopian present of ethno-nationalisms, grotesque capitalist inequality, and the resurgence of white supremacy.”

Taylor was named one of the 100 most influential African Americans in the United States in 2016 by the The Root. Her writing has been featured in a wide variety of publications, including the New York Times, The Guardian, Los Angeles Times, Boston Review, The Paris Review, The New Republic, Al Jazeera America, Jacobin, In These Times, New Politics, and Souls: A Critical Journal of Black Politics, Culture and Society.

She is also the editor of How We Get Free: Black Feminism and the Combahee River Collective, which received the 2018 Lambda Literary Award for LGBTQ Nonfiction.

Taylor’s latest book, Race For Profit: How Banks and the Real Estate Industry Undermined Black Homeownership, has additionally been longlisted for the 2019 National Book Award.

Other speakers in the series will include Amitav Ghosh, an award-winning fiction writer and author of The Great Derangement: Climate Change and the Unthinkable; Nick Estes (Lower Brule Sioux), co-founder of Red Nation and author of Our History Is the Future: Standing Rock Versus the Dakota Access Pipeline and the Long Tradition of Indigenous Resistance; Melanie Yazzie (Bilagáana/Diné), Red Nation member and co-editor of Decolonization: Indigeneity, Education and Society; and artist/activists Amin Husain and Nitasha Dhillon of MTL/Decolonize This Place, an action-oriented movement centering on Indigenous struggle, Black liberation, global wage workers, and de-gentrification.

Keeanga-Yamahtta Taylor will speak at the Music Center Recital Hall on Thursday, January 23, beginning at 6 pm. Admission to the lecture series is free and open to the public with registration. The Beyond the End of the World project is funded by the Andrew W. Mellon Foundation John E. Sawyer Seminar on the Comparative Study of Culture and administered by The Humanities Institute. For more information, go to BEYOND.UCSC.EDU.