Unable to make the event? Watch the full talk here: 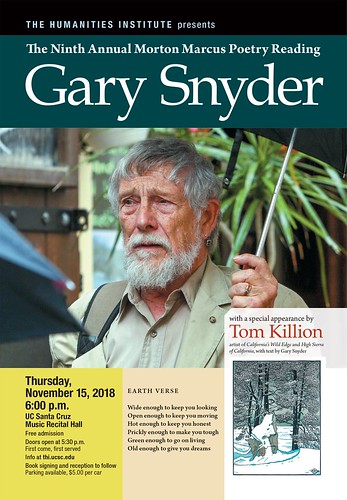 Gary Snyder is a poet, environmentalist, Zen Buddhist and educator. Involved in the Beat movement, Snyder read at the famous Six Gallery reading alongside Allen Ginsberg. Snyder’s writing focuses on environmental concerns and Zen Buddhism. He is an environmental activist who is known for his simple, clear style, as well as his first-person descriptions of his experiences in the natural world. Snyder’s poetry is influenced by Japanese haiku and Chinese verse, in addition to his knowledge of anthropological factors like oral traditions. Over his long career, Snyder has written more than 20 books of poetry and prose. In 1975, his collection Turtle Island was awarded the Pulitzer Prize for Poetry. His 1992 collection, No Nature, was a National Book Award finalist and he received the Ruth Lilly Poetry Prize in 2008.

Tom Killion is famous for his vibrantly colored woodcut prints of the California landscape. He was born and raised in Mill Valley, California, on the slopes of Mt. Tamalpais. The rugged scenery of Marin County and Northern California inspired him from an early age to create landscape prints using linoleum and wood, strongly influenced by the traditional Japanese Ukiyo-ë style of Hokusai and Hiroshige. He studied History at UC Santa Cruz, where he was introduced to fine book printing by William Everson and Jack Stauffacher. In 1975, he produced his first illustrated book on UCSC’s Cowell Press. After traveling extensively in Europe and Africa, Killion returned to Santa Cruz in 1977 and founded his own Quail Press, where he published his second book, “Fortress Marin”. Visit tomkillion.com to learn more.

About Morton Marcus: The Morton Marcus Poetry Reading event commemorates Santa Cruz poet Morton Marcus who was a poet, author, teacher, film critic, as well as an activist for the arts. Born in New York City, Morton spent most of his professional life in Santa Cruz, California, and he is strongly associated with its poetry and art community. For more information visit www.mortonmarcus.com. You can also view the Morton Marcus Archive in Special Collections at UCSC.