UC Santa Cruz literature professor and Dante Alighieri expert Filippo Gianferrari reflects on the renewed relevance of the Divine Comedy on the 700th anniversary of the epic three-part poem’s completion. Earlier this year, THI spoke with Gianferrari about his time as a THI Faculty Research Fellow. 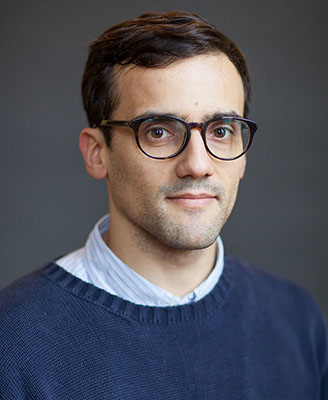 Like everyone else, UC Santa Cruz literature professor and Dante Alighieri expert Filippo Gianferrari has been living in a kind of limbo since the pandemic hit the United States. Some might even call it a purgatory.

But isolation has given Gianferrari a chance to reflect on the renewed relevance of the Divine Comedy on the 700th anniversary of the epic three-part poem’s completion.

For the past few months, he’s been taking strolls out of his home in the Seabright neighborhood in Santa Cruz, or venturing onto West Cliff Drive to check out the surf breaks.

His in-person classes are on hold.

“It’s tough,’’ he said, while out on a walk through Santa Cruz’s Arana Gulch, a small, quiet patch of green grass and oaks with a wandering stream. “I’m really lucky to have a family with me, although sometimes, you feel like you might go crazy, with everybody in the house. I do strongly believe we’re made to be together. I’m getting literally sick from being in front of the computer. We’re natural beings. We need to move and interact. We can’t just sit there all day.”

In such a time of longing for connection, and taking stock of the way human beings have been treating each other during the pandemic, for better and worse, the Divine Comedy has a special resonance for contemporary readers, Gianferrari said.

In late July, Gianferrari contributed an essay to Breaking Ground,a creative web commons dedicated to Christian social thought, that drew links between the social isolation of the COVID-19 pandemic and Dante’s Purgatorio, the second section of the three-part epic. In his essay, “Stranded on Purgatory Island,” Gianferrari urged readers to think of this tragic time as an opportunity to consider our common ground as human beings, and “purge our past indifference and our collectively endorsed solipsism.

“But we do this work to embrace a new vision of ourselves, one in which we depend on others to fulfill our nature instead of our needs,” Gianferrari wrote. “Although in isolation, we share our new condition with the rest of humanity.

“This common path grants us an unprecedented opportunity,” he continued. “One day we may look back at the pain of this separation and call it solace. Because redemption is the most brilliant paradox of human existence: We have been given a second chance that we neither earned nor deserved.”

Insight into the human condition

That intimate essay was part of Gianferrari’s wider argument that the Divine Comedy, when taken as a whole, or in its three linked sections, provides timeless insights on what it means to be human.

“We read this because we are fascinated by ourselves, not in a narcissistic way but in a curious way,” Gianferrari said.

This famous poem illuminates truths about humanity, including the nature of true love and happiness, and how flawed conceptions of these things can lead to suffering.

The narrator of the Divine Comedy is Dante, or a construction based on Dante, a narrative persona that Dante devised to tell the story. In that sense, the Divine Comedy, which Dante completed in 1320,  is “incredibly modern,’’ according to Gianferrari. It’s as if Dante wove himself into a rich tapestry that tells a story of human progress.

The plot of this three-part epic poem is simple, frightening, and effective. It starts off like a thriller, with the hero in grave danger.

From the very first line, the narrator is “in dark woods, the right road lost,’’ scared for his life, filled with terror. He sees a leopard stalking him, “roaring with hunger.’’ Then a “grim she-wolf” appears, and it seems his troubles are just beginning. Out of nowhere, the ghost of the great poet Virgil comes to the rescue. But, as Dante soon realizes, Virgil’s rescue mission will take him straight to the depths of Hell.

The reader knows that the journey is going to take a turn for the worse when Dante crosses through a portal, marked with a familiar warning: “Lasciate ogne speranza, voi ch’entrate”—”Abandon all hope, ye who enter here.”

Instead of hardening his heart to the sufferers around him, the narrator shows real compassion, a quality that connects him with modern readers. Hell is strangely bureaucratic, an endless dungeon where sinners face punishments that echo their crimes. After witnessing many ghastly sights, including a sinister boatman and a many-headed voracious dog, Dante ascends to Purgatory, and makes his way toward Paradise.

Throughout the Divine Comedy, Dante’s views on sin, morality, and empathy become more complex. He starts off sympathizing with the souls of the damned, and admits his own vulnerability to temptation, before taking on a more judgmental view and showing resentment toward evil behavior.

But Dante never abandons his human empathy, which is one reason why the poem still resonates today.

The afterlife of Dante is all the more remarkable when we consider that the individuality of authors was not important to medieval culture. To arise from that kind of culturally sanctioned anonymity, Dante had to be a “big, bold character, someone who is in your face from the very first moment,” Gianferrari said.

But his bold individualism is not the only reason Dante remains relevant.

“The Divine Comedy is still read and commented on because this is a text that lends itself, always, to new, and renewed readings. I’ve been reading this book for years, but every time I teach it, I hear from students who pick up on some aspect of it that I’d never thought of,” said Gianferrari. “You can sit around and have so much fun, with people coming from all sorts of different backgroundssitting down and discussing it. It’s just mind-blowing, the fact that everyone sees something different in the text. It creates a bond between people, and to me, that’s the reason we celebrate Dante.”