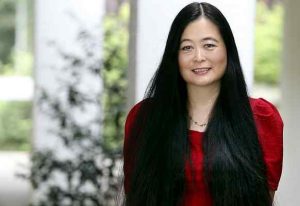 Alice Yang, seen at UC Santa Cruz on Friday, is the provost for Stevenson College, associate professor of history, and an advocate for social justice. (Kevin Johnson — Santa Cruz Sentinel)

For UC Santa Cruz Stevenson College provost and associate professor of history, Alice Yang, the price of liberty is eternal vigilance combined with social activism and scholarship that illuminates the nation’s triumphs as well as tragic missteps.

“Government must be held accountable for its actions and reminded that the foundation of the country is the protection of everyone’s civil liberties,” Yang, 51, said. “During times of turmoil and threats to national security it is especially critical to guard against hysteria that leads to bigotry and to the demonizing and mistreatment of ethnic minorities.”

Yang personally knows the consequences of fear and oppression. Her family fled North Korea and immigrated to South Korea — and later the U.S. — after the Korean War seeking freedom and economic opportunity.

During the Japanese occupation of Korea from 1910 to 1945, Yang said many of her relatives were persecuted and killed. Just for speaking her native Korean language in elementary school, Yang said her mother was scolded and slapped by a teacher.

Growing up in Sacramento, Yang’s parents expected her to excel and to cherish the possibilities that their new life offered. Their advice: “Don’t waste your talent, give your best effort and value the family.”

Yang earned a bachelor’s degree in English and American literature as well as a master’s in teaching social studies from Brown University and a master’s and a doctorate in history from Stanford University.

Initially, Yang intended to study women’s history and the suffrage movement but an exhibit and a forum at the Oakland Museum in which three generations of Japanese-Americans spoke about being uprooted and forced into internment camps during World War II left her stunned. She felt compelled to broaden her focus to include racism and historical incidents of government sanctioned persecution.