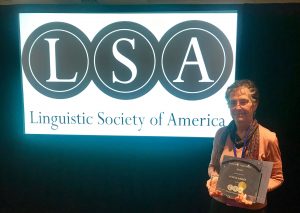 This award honors the linguist Ken Hale (1934-2001), whose work brought indigenous languages to bear on issues in theoretical syntax, thereby transforming a field which had previously been dominated by the world’s major languages. Hale was also a forceful advocate for the need to train native speakers of indigenous languages as linguists so that they could participate fully in the documentation and analysis of their own languages.

The citation from the LSA reads: