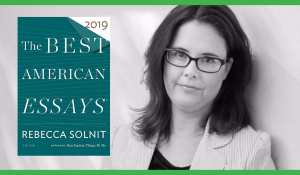 The work of UC Santa Cruz Anthropology Professor Megan Moodie was recognized by this year’s Best American Essays, edited by Rebecca Solnit and Robert Atwan. Moodie’s piece “Birthright,” first published in the Chicago Quarterly Review (2018, vol. 26), was named a Notable Essay of the Year in the influential collection.

The early drafts of “Birthright” arose during a 2014-2015 THI Research cluster of which Moodie was a member. The essay, “which deals with motherhood, disability, art, and the body as an archive, really grew out of the interdisciplinary work of our “Complicated Labors” cluster five years ago,” says Moodie. “Thanks THI!” 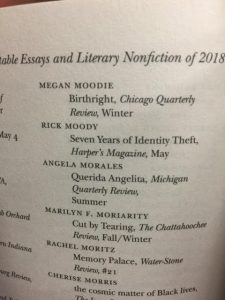 As a Professor of Anthropology, Moodie’s work addresses feminist theory, indigeneity, reproduction, law, and the state in the U.S. and South Asia, but she also specializes in experimental ethnographic methods, including film and creative writing in both fiction and nonfiction genres. As such, Moodie is currently a Principle Investigator of The Body, (Anti)Narrative, and Corporeal Creative Practices, a 2019-2020 THI Research Cluster that examines the relationship between narrative and the body. These same themes of embodiment are evident in “Birthright.”

Here’s a short excerpt from the essay:

“I never want to ask “why me?” because it’s a cliché and I edit even my most private fantasy life for literary effect. It’s the question I’ve been asking all along, though, the one I have been putting to my doctors for years. They are all handsome, McDreamy young men, my age, early 40s, flushed with the excitement of successful careers that will pay back their student loans. They call me their sister. I ask them, in a thousand calm and non-emotional ways “why me?” For years they can’t answer.”