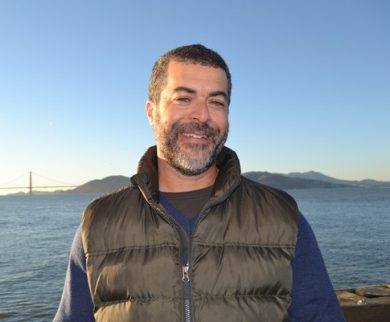 Eric Porter is Professor of History, History of Consciousness, and Critical Race and Ethnic Studies at UC Santa Cruz. His work spans Black cultural and intellectual history, urban history, and jazz studies. Recently, Porter co-edited the volume Playing for Keeps: Improvisation in the Aftermath, “an exploration of the various ways that musical improvisation can be used as a method for responding to crisis and dealing with trauma and stress.” His contribution to our 2021 Memory Series speaks to the relationships among memory, music, and the habits of body and mind that sit at the core of the jazz tradition.

A Cathedral of Memories

Memory infuses musicking (playing, listening, recording, composing, and the rest) whether we remember that or not. I’m sometimes reminded, when I pick up my guitar, of the different ways memory lives in my hands: in the deepening creases in my skin after close to sixty trips around the sun; in the knot on my right (luckily) index finger knuckle; in the sore tendons in my left hand (not so lucky); in the practice behind fingers and hand forming chords without thought; in knowing how to bend a string just so to get that sound. Playing music, especially for an amateur like me, can be about the failure of memory, too. How does that chorus go? Is that actually an A-flat 11 chord?

Often playing or listening to music is simply about letting the memory of how to do that guide muscles and mind. But sometimes music opens the door to a cathedral of memories of a different sort: those we choose to access and those that rise up and insistently present themselves to us. Yes, the teacher said this chord substitution would work here. Now, I’m back in the room when my parents put on that record and danced. Oh, I’m reminded of that night when good friends found and lost gathered in the yard, drinking, playing guitars, trying to sing that song, laughing at ourselves. And I remember that sad time that seems to have nothing to do with that muted trumpet solo except for the emotional portal it opened up.

Music’s ability to hold and evoke memories is one of the things that makes it such a powerful social (as well as personal) phenomenon.

Music’s ability to hold and evoke memories is one of the things that makes it such a powerful social (as well as personal) phenomenon. As it floods the present with sound and pushes us rhythmically into the future, it carries a multiplicity of pasts with it. Some are our own. Others are those of one collective or another, to be claimed in necessarily inventive ways if we choose and dare to do so. Some are there, embedded in the sound, expecting interpretation. Others exist primarily in our own repertoire of memories, awaiting a sonic catalyst.

Saying something about Black musicking amplifies the challenge. For we are compelled to confront the longue durée of hope, grief, pain, love, beauty, lament, desire, aspiration, and (the list goes on) associated with the music—and the impossibly complex process of just being with it. And we’re obliged to address the almost-as-long history of political and cultural noise around the music, disruptive in the best and worst ways: the sublime moments when people get it right—Zora and Langston on the blues, to begin with—but also the political and ideological excess, the primitivist projections, and all the rest.

Jazz is flush with memory. And I will define jazz, at the moment, as Black music, no matter who plays it, anchored in the blues, with an improvisational inclination, at least, and some measure of engagement with a shared musical and social past. This includes music actually called jazz but that which goes by other names too. So, per some folks I’ve been listening to lately, that includes Billie Holiday but also Mourning [A] BLKstar, Buika, and Amirtha Kidambi.

Memory in the form of study distilled into habits of body and mind helps make jazz. As do the lifetimes of social experiences of those who play it. But there is a broader cathedral of memories carried by the music, ready to be catalyzed by it, whose roots go back to the emergence of the music early in the afterlife of slavery. Back when the music sounded a post-emancipation experience defined by movement—across regions, from country to city, from city to metropolis—as shaped by new forms of gender, sexual, economic, and racial exploitation and violence but also by more access to education, better work, and the thrill of new forms of sociability and intimacy. The sonic traces of trauma and resilience have survived in blue notes, augmented chords, syncopated rhythms, extended solos, the quoted notes from past performances, and all the rest. They have been further cultivated and refracted—selectively, haphazardly, conscientiously—through so much practice and study; so many family stories; so much rich work of poets, painters, dancers, documentarians; so much listening with personal and collective memories at hand. The dance of trauma and resilience is in these ways continued in its activist, aesthetic, philosophical, and consumerist forms.

Memory in the form of study distilled into habits of body and mind helps make jazz.

This practice of remembering and creating, of course, has played out in an almost unfathomable array of ways, mundane and profound, across social space: in clubs, recording studios, bedrooms, and backyards, all across the nation and other places, too, as people in South Africa, France, Japan, Brazil, the Philippines and elsewhere have taken those memories signified by and through jazz and combined them with their own.

And the story continues, as the contributors to Terri Lyne Carrington’s Music for Abolition reminds us. Musicians continue to tap into these stores of memory as they push the art form in new directions, constantly combining musical elements, old and new, drawing in their listeners, building upon personal and collective struggles, small and large, in the music scene and beyond. And, all the while, this world, with its gender violence and racial capitalism, its police and prisons, its wars and pandemics, its fires and rising sea levels, but with its good times and gentle times, too, continues to make the music matter . . . still. And then there is more to remember and more to try to write about.

“A Cathedral of Memories” is part of The Humanities Institute’s 2021 Memory Series. This series features contributions from a range of faculty and emeriti in the Humanities community at UC Santa Cruz – each of whom highlight connections between memory and their work or meditate on memory’s relevance in our current moment. Throughout Spring quarter, be sure to look for these amazing essays in our weekly newsletter!