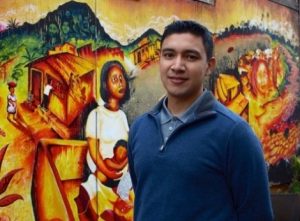 “What’s going to happen to these murals down the line? Will they be protected? Conserved? Whitewashed?,” asks Mauricio Ramírez. (Photo by Fatima Ramírez)

The Mission District in San Francisco boasts good weather, great food, and more murals than any other neighborhood in the city.

Many of these paintings celebrate the landscapes and cultures of Central America, as well as the violence and civil wars that racked Nicaragua, El Salvador, and Guatemala. Those conflicts fueled the migration of thousands of Central Americans to San Francisco over three decades, beginning in the 1980s.

Mauricio Ramírez is an artist, a muralist, and a native San Franciscan who is fascinated by the Mission’s murals—and by the progressive coalition of artists and immigrants that coalesced during those decades.

“I saw these murals created mostly by Mexican Americans and Chicano artists, and I wondered what would make them paint in solidarity with Central Americans,” explained Ramírez, a third-year doctoral student in Latin American and Latino studies whose dissertation focuses on transnational solidarity in Latinx visual art in the San Francisco Bay Area. “Mexican American and Chicano activists were very welcoming.”