By Jennifer McNulty for UCSC News

A disturbing video captured the murders of several women and young children in a remote African village, and yet the perpetrators were free. That was all a team of investigators needed to dig in, using satellite imagery, tips, news reports, and determination to identify where the atrocity took place, when, and by whom.

When confronted by BBC News with the team’s findings, the government of Cameroon arrested seven members of the military who are currently under investigation for the murder. That dramatic case from 2018 illustrates the impact digital investigators can have on allegations of human rights violations.

The new Human Rights Lab, run out of the Research Center for the Americas, will investigate alleged human rights violations. This video, produced by the BBC, presents an example of the type of work the lab might do. The video describes the step-by-step digital investigation that revealed where in Africa several women and children were murdered and the identities of their alleged killers. As a result of the investigation, seven members of the Cameroonian military have been arrested and are under investigation for the slayings. Note: The video, although disturbing, is not graphic. (Video courtesy of the BBC)

The emerging field of “digital verification,” which is taking hold in newsrooms and nonprofits around the globe, is now taking root at UC Santa Cruz. The new Human Rights Lab went live this fall with 16 undergraduates and three graduate students who have made a three-quarter commitment to mastering high-tech tools and investigating alleged human rights abuses.

The need to verify digital information gained attention this summer when images of fires burning in the Amazon rainforest went viral—and then high-profile celebrities and politicians were called out for tweeting and sharing misleading, outdated images.

In recent years, the New York Times has established its own digital verification unit, Amnesty International has partnered with university-based teams to advance its mission, and the United Nations and the International Criminal Court have relied on open-source evidence for holding perpetrators accountable. 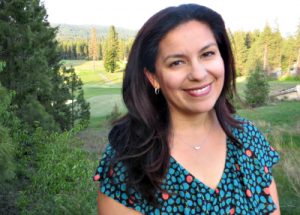 Sylvanna Falcón, a professor of Latin American and Latino studies and a human rights researcher, brought the lab to life with seed funding from the Santa Cruz Institute for Social Transformation.

“There’s a new stream of careers in journalism, law, and with advocacy organizations that need people trained in open source tools,” said lab director Sylvanna Falcón, a professor of Latin American and Latino studies (LALS) and a human rights researcher.

Falcón was inspired by a similar lab that opened at UC Berkeley three years ago. That “sister lab” is affiliated with Berkeley Law, while UCSC’s lab will be aligned with the mission of the Research Center for the Americas, which Falcón directs. Students have expressed interest in probing allegations of human rights violations in U.S.-Mexico border detention facilities, she said, explaining that Google Earth, maps, and media reports can help investigators monitor and verify what’s happening on the border.

“Too many qualified undergrads”

Falcón had intended to accept 10 undergraduates this year but was overwhelmed by the quality of applicants and enrolled 16; three graduate student researchers are providing support and serving as mentors to the undergrads. Falcón enrolled in a five-day training in open source investigations by Bellingcat, a leader in the field, and she and the students received two days of training at UC Berkeley from Amnesty International’s Digital Verification Corps.

Falcón has thoughtfully designed a class framework that will foster teamwork and be responsive to the well-being of students: Three undergraduate managers will lead their teams, which are encouraged to brainstorm how to approach each case, or alleged violation of human rights. Each undergraduate manager has also been paired with an undergrad from the UCB lab. Independent work will complement weekly lab sessions in the Digital Scholars Commons of McHenry Library, and a weekly seminar will bring the whole group together for “face time,” as well as what Falcón calls “resiliency exercises.”

“Some of these materials can be hard to view, especially watching violence repeatedly to verify the material, and we don’t want anyone experiencing secondary trauma,” she said, adding that the class offers a “tailored seminar, research experience, and attention you can’t get at a larger institution.” 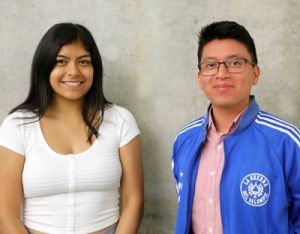 Kayla Gomez and Josue Perez are among the undergraduates who have made a year-long commitment to the Human Rights Lab. “At UCSC, in a lot of the classes you get exposed to injustices around the world,” said Perez. “This lab was a follow-up to learning about those. I learned about injustice, and now I’m doing something about it.” (Photo by Carolyn Lagattuta)

Josue Perez, a senior majoring in sociology, jumped at the opportunity to apply for the class. “At UCSC, in a lot of the classes you get exposed to injustices around the world,” he said. “This lab was a follow-up to learning about those. I learned about injustice, and now I’m doing something about it.”

Perez, a team leader, described the first digital-verification exercise his team was given as practice. Shown a photo of a WalMart parking lot with stores nearby and mountains in the background, the students were tasked with finding its exact location. Over the course of half an hour or so, the team used open-source tools to analyze images, search addresses, and even read restaurant reviews—one of which listed the address, which turned out to be in Puerto Vallarta, Mexico. “It was fun,” he recalled. “The team was bouncing ideas off each other.”

This class is different from typical, structured university courses with exams and set assignments, and he’s looking forward to the challenge of solving real-world cases. “I’m optimistic we’ll complete our investigation and provide our partner with the best information we can,” he said.

The two-day training included instruction on steps students can take to protect themselves online, how to monitor their digital footprints, mask their locations when working off-campus, and communicate across secure channels. And they received strict instructions about maintaining confidentiality. “They told us how to talk about our work with family and friends, to maintain security and protect the program,” said Perez. “We can’t have leaks. I appreciate that there’s been so much effort to keep us safe and to keep the program safe.”

The Berkeley lab has partnerships with Amnesty International and other high-profile organizations, and Falcón has established a partnership with the Center for Climate Crime Analysis (CCCA) based in The Hague, The Netherlands. CCCA is focused on the climate crisis and its board members are affiliated with the International Criminal Court and the United Nations. The names of other UCSC’s partners are being kept confidential for now at their request. But the process begins when a partner presents the team with a “case”—materials that must be verified and investigated. That’s when the forensic analysis begins.

The first step of any investigation is preservation. Once the public records, photos, videos, or social media posts have been secured, the teams will use open-source tools to verify them. Such tools reveal details like when a digital image was first created, when it was uploaded to the internet, and how many times it has been “pinned.” The next step is deciding what information to go after next, and creating a flowchart to track the team’s process. At the end of each probe, the team will prepare a report for the partner agency, which will use the report to advance its work.

“Cases are confidential and we won’t be able to discuss them until they’ve been completed,” said Falcón. “We want to remember the work is not about us, but about—and for—those who are being adversely affected by injustice. We have a responsibility to protect them.”

Yoselyne Cerros, a second-year students at Oakes College, is majoring in LALS and politics and thinking about law school after graduation. “This class is directly relevant to my path,” she said. “I’m interested in doing hands-on work with human rights violations and helping in any way I can.”

Cerros hadn’t heard about open-source digital verification until Falcón announced the creation of the lab during a class last spring. She grew up around technology and said she’s not worried about picking up new skills. “I can adapt to technology very well,” she said.

Growing up near the U.S.-Mexico border sensitized Cerros to immigration-related abuses. “I always see ICE patrolling around underclass neighborhoods,” she said. “It’s crazy they can stop you because you ‘look like an immigrant.’ It seems very racist. My intention is to help underprivileged people.”

“When activists speak up, they face consequences”

Ever since she was in high school, Kayla Gomez has been interested in human rights work. As a senior, she spent three weeks in the Dominican Republic learning about local nongovernmental organizations, and last December she worked alongside the community to help build a school in Haiti. Seeing the effects of political corruption, and the struggles of average people, had an impact. “Right now in Haiti, people are rioting because the president isn’t doing his job,” she said. “He’s very corrupt. There are marches and protests, and the military has been trained to kill activists.”

Now, as a second-year majoring in politics, Gomez is eager to give back. “We have a lot of privileges—safety, access to information,” she said. “I want to learn how to access this information that’s available to us to help somebody else.”

Gomez is particularly concerned about the wellbeing of journalists in hot spots around the world. “When activists speak up, they face consequences, and a lot of times, journalists are murdered,” she said, adding that she appreciates the security precautions the lab is employing. “When people start looking for the truth, trying to hold people accountable, they can get in trouble. People come after the people coming after them.”

The training at Berkeley was inspiring. “They’ve only been going for three years, so to see the potential our lab has was really cool,” said Gomez, who’s also a fellow of the Everett Program, a student-led initiative that uses information technology to promote social change. The Human Rights Lab received start-up funds from the Santa Cruz Institute for Social Transformation, as well as financial support from the Division of Graduate Studies and The Humanities Institute.

“We are a research university, and we’re doing research,” said Gomez, who plans to join the Peace Corps after graduation next year. “It’s important to be able to say, ‘Here’s what I did.'”

Graduate student Alejandra Watanabe Farro, a first-year doctoral student in Latin American and Latino studies, is eager to explore human rights violations associated with environmental issues, including illegal gold mining in the Peruvian Amazon. “It has atrocious consequences on the forest and rivers, which impacts indigenous and local people, and it brings a host of problems: trafficking, sexual exploitation of children, and other human rights violations,” she said. “Local communities and grassroots organizations don’t have the tools to make a case out of violations.”

Deforestation leaves a trail that investigators can follow, from logging roads to sales records. “You can track the money using these methods,” she said, adding that airplanes and ocean-going vessels are required to file public records, which also offer valuable clues about illegal activity. “The potential is huge. These are tools organizations in Latin America will find very useful.”

This article was originally published in UCSC News.

THI is a proud co-sponsor of the Human Rights Investigations Lab for the Americas.