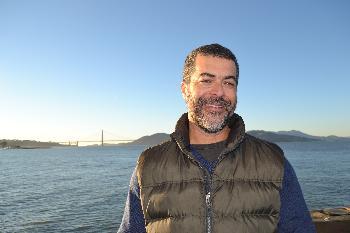 Eric Porter, a professor of history, history of consciousness, and critical race and ethnic studies at UC Santa Cruz, has a longstanding fascination with musical improvisation as a creative, generative art form with implications that go far beyond the record turntable or the stage.

Jazz improvisations are more than just artful upwellings of inspiration and creativity. A saxophone solo, a drum break, and a sinuous bass line may transport audience members, but these musical flights are also living metaphors of autonomy and resistance.

Eric Porter,  a professor of history, history of consciousness, and critical race and ethnic studies at UC Santa Cruz, has a longstanding fascination with musical improvisation as a creative, generative art form with implications that go far beyond the record turntable or the stage.

“The performative aspects of improvisation can be a way of doing different political work, some of which might be called resistance, survival, and promoting one’s own resiliency in the face of the forces that impact our lives,” Porter said.

Improvisation is a complex art. On the one hand, an accomplished improviser must be a master of technique, discipline, and craft. On the other hand, it requires a certain looseness and an ability to make plenty of room for collaborators in an ever-changing aural landscape.

In conversation, in classrooms, and in his published writings, Porter has a passionate, clear, and ingratiating way of breaking down this complex sociopolitical musical concept in a way that engages, entertains, and makes scholars want to delve more deeply into jazz and other forms of improvised music as socially relevant artistic expressions.

In the preface to Sound Changes: Improvisation and Transcultural Difference, a forthcoming book from the University of Michigan Press, Porter and the book’s co-editor, Daniel Fischlin, describe “the creative risk-taking …. , movement and momentum that make improvisation an exciting, unpredictable, ubiquitous, and necessary endeavor,” one that yields self-determination and power in a creative context.

A long and winding musical pathway to UC Santa Cruz

In a sense, Porter’s long path to UC Santa Cruz started during his childhood in the East Bay.

“Jazz was in my house all the time,” Porter recalled. “Both of my parents listened to the music and played saxophone. My father was probably a bigger jazz fan than I was. When I was a teenager, I listened to funk, soul, rock, blues, and fusion kind of stuff I found in record bins, but the interest in jazz had already been ingrained.”

Porter earned a bachelor’s degree in history from UC Berkeley before starting his graduate studies at the University of Michigan, where he earned an M.A. and Ph.D. in American studies in 1997. That year, he married Catherine Ramírez. Both went on to become faculty members at the University of New Mexico before moving on to UC Santa Cruz, where Ramírez is a professor of Latin American and Latino studies. Porter said he was drawn to the campus “because it seemed like a really rich place to do my work and have a dialogue with people.”

Porter has written or co-edited an impressive array of books exploring improvisation. Playing for Keeps, one of the books he has co-edited with Fischlin, collects 12 essays showing how improvisation provides the means for its participants to address past traumas and ongoing crises while imagining better futures in places ranging from South Africa and Egypt to the United States, Canada, and the Canary Islands.

A tool for change

Porter became interested in improvisation and its possibilities nearly three decades ago when he was still in graduate school. In the early to mid-1990s when he was searching for a dissertation topic, jazz was resurgent, with musicians such as Wynton Marsalis reaching large audiences while working to shape the public conversation around jazz and its importance as a cultural tradition.

At that moment, when scholars in the emerging field of jazz studies were documenting the meanings circulating around jazz music over the years, Porter became interested in how musicians were theorizing its social significance. His dissertation, a history of Black musicians’ thinking about jazz, became his first book, What Is This Thing Called Jazz? African American Musicians as Artists, Critics, and Activists, published in 2002 by the University of California Press.

Since then, he has become interested in other forms of improvised music and how they, too, have been seen as potential tools for change. By definition, improvisation requires a deft combination of skill and flexibility.

“The work [co-editor Daniel Fischlin] has done over the years has focused on interactive aspects of improvisation and how this ability, this sharing, requires you to put parts of your ego aside,” said Porter.

Improvisers “need to listen carefully to what others are doing,” he continued. “They have to be able to engage in a respectful musical dialogue.”

Porter had also noticed an intriguing overlap in activism and improvisational prowess. Many of the jazz world’s finest improvisers are known for their overt political stances, including Max Roach and Abbey Lincoln, whose anthem, Tears for Johannesburg, was part of a body of work exploring oppression and colonialism.

Other prominent Black jazz greats, including Charles Mingus, were outspoken about being underpaid, and often underappreciated musicians.

“He thought jazz musicians were serious artists but was perpetually outraged that they were not treated like serious artists,” Porter said. “He was very critical of the conditions in which they labored. He saw a certain legitimacy in playing in serious spaces where people listened to you instead of drinking and socializing.”

Improvisation is a collaborative practice that can build communities, with musicians taking risks while uniting in an artistic goal, Porter said.

Jazz improvisation can be seen as “resistance” music because jazz performers created art in the face of prejudice and also because of the political consciousness imbued in the music itself. Last fall, a New York Times feature story called jazz “protest music … As it evolved, jazz remained a resistance music precisely because it was the sound of Black Americans building something together, in the face of repression.”

But musical improvisers are only human, and there can be lapses of communication, divisions, as well as hierarchies and prejudices that can divide any community, Porter said. After all, human beings are complicated—and pandemic isolation has introduced another potential obstacle to improvisation.

“This goes back to the notion of resiliency,” he said. “It has been such a scramble” for musicians to make a living even before the pandemic, which has pushed many of them to the limit.

“I’m really worried about what comes next, whether musical venues that sustain these artists will survive,’’ he said.

“We’ve seen some interesting experiments with interactive programs that let musicians perform ‘together’ in real time though they may be thousands of miles apart,” he continued. “Certainly, there are technologies we can use to sustain this sense of community. But hey, there is nothing like being in the room to have the full sensory experience of improvisation. That is just irreplaceable.”