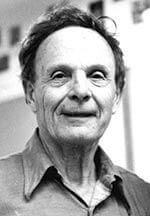 Next month, on May 17 – 18, the History of Consciousness department at UC Santa Cruz hosts a conference on the life and works of radical scholar Norman O. Brown. The conference organizers, PhD Candidate Isaac Blacksin and Professor Emeritus James Clifford, met to discuss who exactly Norman O. Brown was, his enduring legacy, and how his work remains meaningful in our current political climate.

Isaac Blacksin (IB): We’re organizing a conference on Norman O. Brown, a major intellectual of the late 20th century­—discussed in the pages of the New York Times and the Paris Review—but now mostly forgotten. Who was this guy? Why was he important to Santa Cruz and why was Santa Cruz important to him? 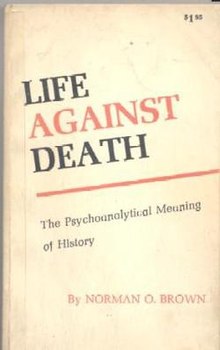 James Clifford (JC): “Nobby,” as we all called him, was a charismatic figure. His two most famous books, Life Against Death (1959) and Love’s Body (1966), established his reputation as an intellectual of incredible range, from classics to psychoanalysis, mythology to Marxism, philosophy to poetics. He was a radical questioner—of orthodoxies, of his students and colleagues, and of his own prior work. Many of us who accompanied him on his long walks through the forest or by the sea—he was a peripatetic thinker—recall the intensity of his conversation. He was always probing, confronting, asking. We’d emerge inspired, and wrung out!

IB: So Nobby was a catalyst for original, subversive thinking?

JC: When I arrived to Santa Cruz in 1978, Nobby seemed to embody the radical, border-crossing spirit of UCSC’s founding vision. Many of us found that freedom, combined with scholarly rigor, exhilarating. Of course, the “sixties” faded out, and with it Norman O Brown’s national and international influence.

Which leads to a question I’d like to ask you: It’s understandable that someone of my generation would want to revisit Nobby’s work. But why would a younger scholar like you, a current PhD student, be interested—enough to take the lead in organizing this conference? Why do you think it’s worth reviving his legacy or, as he’d say, “making it new?” 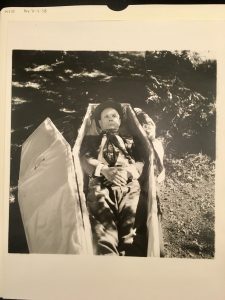 UCSC Library Special Collection — items from the Norman O. Brown archive are on display at McHenry Library until May 19, 2019.

IB: There’s something about the nonconformity of Nobby’s work—its transgression, really—that seems urgent. His output is difficult to categorize in terms of established disciplines, and the form and style of his writing break decisively from conventional academic prose. We might look to Nobby, then, not for “interdisciplinarity” as such, but for thinking and creating in new, and often heretical, ways. Little seems sacred to Nobby, and this attitude (to ideas, institutions, identities) provides an openness critical, I think, to confronting a changing world.

Of course there’s risk of nostalgia in this backward glance. But as a post-68 moment dissolves into what might be called a pre-fascist one, Nobby is a particular resource. The title of his 1991 book suggests as much: Apocalypse and/or Metamorphosis. We’re facing this now, and while apocalypse seems everywhere on offer, metamorphosis is not adequately engaged. Nobby gives us ways to think about change and possibility; he helps us to think big, but without the hubris of certainty. 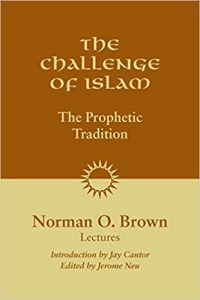 IB: I believe so. During my dissertation research, I was at a bar in Lebanon when a bombing was apparently thwarted across the street. Stepping outside, I saw the owner of the bar amidst the pandemonium; I had a book under my arm, and he asked what I was reading. It was Life Against Death. He explained how Nobby’s The Challenge of Islam (2009) forced him to reconsider what Islam could be. And that’s what I love about Nobby: the unexpected.

JC: Yes, no one expected his turn to Islam. The 1979 Iranian Revolution forced him to rethink “The Prophetic Tradition,” which had long been the capacious, deep-historical context for his thinking. The roots of this tradition were Greek polytheism and Hebrew-Christian monotheism—the dialectical tension between them—which ultimately found expression in the radical poets, Blake and Joyce. Nobby was always focused on revolutionary prophets of transformation.

Ayatollah Khomeini (the leader of the Iranian revolution), was “the prophet armed.” Nobby realized that the big historical story he’d been telling for years left out a major strand, Islam, with its links to the Hebrew Old Testament and early Christian heresies. Islam was a powerful—enriching and disrupting—historical force, and a new kind of universalism. After 1980, he spent five years of intense study, playing catch-up with the scholarship he had missed. I would sometimes meet him leaving McHenry library on Friday afternoon with a big pile of books from inter-library loan wedged under his arm. Weekend nourishment.

IB: He shared what he learned with the campus, didn’t he? In a series of lectures?

JC: I’ll never forget the commencement address he gave in the Quarry to bewildered parents around 1981. He began by listing what we need to understand “before we go to war”; first was “the difference between Sunni and Shi’a.” 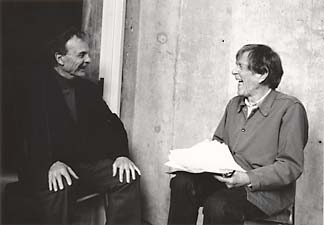 We still have a lot to learn from Nobby, and not just about the West’s antagonistic kinship with Islam. Most important is his way of engaging with the forces driving history, withholding condemnation and listening for the possibilities of metamorphosis, history’s chance operations (a method he learned from his friend John Cage).

IB: Yes, that’s right; Nobby was willing to take risks for openness, transformation, possibility. This in both form and content, and whether dealing with Greek classics, Freudian psychoanalysis, Marxist revolution, Islamic prophesy, American poetics, or his own radical pedagogy. It’s the refusal of determinism that makes Nobby so valuable today; he eschews a grand theory of history yet still inspires us to think in a grand manner.

We’re trying to take this seriously in the conference too, covering the various strands of Nobby’s corpus while keeping things open. There will be formal presentations—Michael Davidson on Black Mountain poetry, Rebecca Herzig on utopia and liberation, Daniel Tiffany on prophetic voice, among much else. But we’ll also make space for discussion and performance, a short experimental film, a guided hike along an old Nobby trail.

Hopefully we’ll discover life among these ruins, and see what can be “made new” of it for our own apocalypse, our own metamorphosis.

The Norman O. Brown conference will take place on May 17 and 18 in the Page Smith Library, Cowell College. The event is free and open to the public, and all are welcome.

From April 19 – May 19 UCSC Library Special Collections hosts a display of items from the Norman O. Brown archive. Now on view at McHenry Library.

This event is co-sponsored by The History of Consciousness department, Cowell College, The Siegfried B. and Elisabeth Mignon Puknat Literary Studies Endowment, and The Humanities Institute at UC Santa Cruz.