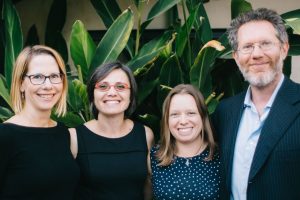 Irena Polić was just a normal teenager, enjoying “a very nice life” in Croatia, when she walked to high school and saw a tank lurking on a street corner.

“I remember thinking, ‘This isn’t supposed to be happening,” said Polić (Cowell ’01, linguistics; MA, linguistics), who is now the highly respected managing director of UC Santa Cruz’s Institute for Humanities Research. She remembers thinking, “’This is in color!’ I saw all these World War II movies. They were all in black and white.”

The Croatian War of Independence was fought from 1991 to 1995 between Croat forces loyal to the government of Croatia and the Serb-controlled Yugoslav People’s Army and local Serb forces.

Polić lived through the war, and survived with family and friends in a basement for a year, after being forced to take a leave of absence from school. The experience forced her to think about “life and my place in the world,” the sort of issues that preoccupy the world’s poets, historians, ethicists, and philosophers.

In a sense, her focus has not changed at all over the years. Polić, the winner of this year’s UC Santa Cruz Outstanding Staff Award, is a staunch advocate of the humanities, which addresses the same concerns that went through her head during those fearful days in the basement: “Humanities are not a luxury,” she said. “Humanities are our life. They show us who we are and where we come from.”

The Outstanding Staff Award, presented every year by the UC Santa Cruz Alumni Council and the Staff Advisory Board, recognizes staff members who go “above and beyond” to help students or colleagues, improve programs and contribute to the university’s intellectual and physical environment.