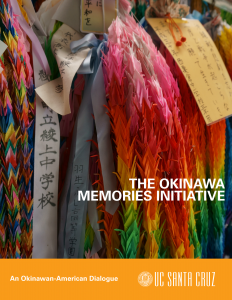 The Okinawa Memories Initiative (formerly The Gail Project) is a collaborative, international public history project that explores the founding years of the American military occupation of Okinawa. The project is inspired by a collection of photos taken in Okinawa in 1952-53 by an American Army Captain: Charles Eugene Gail. The photos were generously donated to Special Collections at McHenry Library by Charles’ daughter, Geri Gail, and have since been made available for student research.

Our team of faculty, artists and undergraduate students at the University of California, Santa Cruz, are developing a traveling exhibition of Gail’s photographs with an accompanying digital archive that is comprised of the photos, key texts and documents, oral histories from both American and Okinawan voices, as well as undergraduate student research and writing. We believe that using the photographs as a lens through which to view this crucial time is relevant to populations throughout Okinawa, Japan, the United States and the entire Pacific region. We hope this project encourages a broad public dialog across the pacific about the past, present, and future of the Okinawan-American relationship.

The project emphasizes hands-on research and creation of stories and art by undergraduate students.

Professor Alan Christy is the project director, Shelby Graham of the Mary Porter Sesnon Gallery is the exhibition director and curator, and Tosh Tanaka is media director.