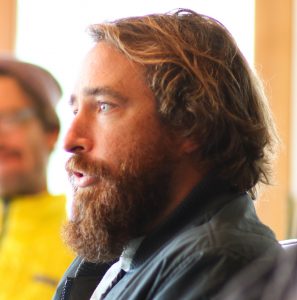 THI speaks with Trey Highton about his role in the Davenport, CA-based Save The Waves Coalition. Highton is the director of the annual Save The Waves Film Festival, and as a Public Fellow he is seeking to create a digital archive of culturally and historically significant oral stories from fellow surfers.

The Save the Waves Film Festival is currently on an international tour spanning five continents and over twenty screenings. The festival comes to Santa Cruz on November 8th. Advance tickets are recommended for the show at Patagonia Outlet, 415 River Street, Santa Cruz, from 7:00pm – 11:00pm.

Congratulations on your 2018-2019 THI Public Fellows role. What do you hope to gain from this fellowship?

I am very humbled to be a part of the initial THI public fellows cohort.  The project I’m pursuing in collaboration with the The Humanities Institute and Save The Waves Coalition is creating a digital archive of culturally significant and historically relevant surf stories.  Oral histories have been the foundation of indigenous Hawaiian history, including surfing, and the notion of ‘talk story’ remains a central component of contemporary surf culture and community.  We are at a critical moment in time wherein many of California’s, and other regions, first and second-generation surfers are passing away.  This project seeks to complement the environmental conservation of Save The Waves with a new element of cultural conservation, by creating an archive of first-hand accounts of surfers’ stories to be preserved for future enjoyment and study.

This fellowship is also allowing me to focus more on my own research and writing to complete my dissertation, and as a new dad, have greater flexibility to support my family and spend quality time with my infant daughter.

That sounds like excellent work. But what exactly is the Save The Waves Film Festival?

The Save The Waves Film Festival is the world’s only internationally touring environmental surf film fest.  Every year we work with a panel of artists, activists, and athletes to curate the best new ocean-focused films to create an educating and entertaining program to inspire our audiences to become stewards of their local coastlines.  An analogy I’m fond of using is that it’s a like a mix tape for your lover, if your lover were the ocean.

What can viewers expect to see in this year’s Festival? 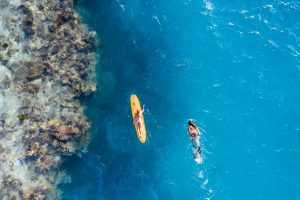 Belinda Baggs & Kimmi Werner on the Great Barrier Reef in Australia, from “Reef Beneath” by Belinda Baggs

We have some amazing films in this year’s lineup, and received film submissions from 18 countries – a new record for our festival.  Some of our official selection features include: Blue, a cinematically beautiful Australian-produced documentary that takes an unflinching look at the ecological crisis that is currently unfolding in our oceans by focusing on topics such as shark finning, ghost nets, plastic pollution, and coral bleaching; Anote’s Ark, which focuses on Kiribati’s president Anote Tong as he seeks to save his homeland and people from the existential threat of sea-level rise to their island nation; The Passage, from San Diego filmmaker Nate Dappen, which tells the legendary journey of his father and uncle who built their own wooden canoes and paddled the Inside Passage from Washington to Alaska in the summer of 1974; and Never Town, produced by activist surfer Dave Rastavich, this film journeys along the rugged Southern Ocean coast of Australia to highlight and support some of the environmental campaigns local communities are leading to protect their surf ecosystems, including a proposed industrial fish farm in King Island and deep-water oil drilling in the Great Australian Bite.

Is the screening all features?

Not at all. In addition to these feature films, we have a bevy of beautiful short films that celebrate the voices of indigenous Pacific Islanders, strong female leads, scientific innovations (the world’s first 3D-printed, compostable surfboard!), poetic storytelling, and of course, some great surfing is in the mix as well.

As well as festival director, you’re a PhD candidate in the Literature department at UC Santa Cruz. How do the festival work and your academic studies intersect?

My current role with Save The Waves actually grew out of an academic conference I hosted, with the help of Prof. Stacy Kamehiro, back in 2013 called “Salt of the Earth: Exploring the Cultural Diasporas of Surfing,” which included a screening at the Rio of the new film Hawaiian: The Legend of Eddie Aikau with director Sam George.  Nick Mucha, Director of Programs for Save The Waves, was a conference panelist and brought me into the STW fold soon thereafter.  I had taught a few courses at UCSC on the history and culture of surfing that drew heavily off of film as a source material, so working with the film festival was an easy, natural fit for me. 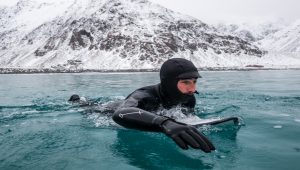 Still from “Addiction” by Marta Guillen

The ethos at the heart of my research is that surfing, through immersion in nature, fosters greater eco-sensitivities in its participants.  From Fukushima to Deepwater Horizon, to the Great Pacific Garbage Patch and massive coral reef die-offs, the effects of the Anthropocene on the oceanic environment are far-reaching and on such a vast scale that even with all of the scientific knowledge we have at our collective disposal, we can scarcely grasp the entirety of the situation.  Being that surfers choose to occupy the liminal space between the land and the ocean, they are natural harbingers of the effects of these changing conditions — surfers are the canaries in the coal mines, if you will, in the oceans of the Anthropocene.   This stark reality of a global oceanic environment in the throes of manmade ecological disaster is a far cry from the idealized images of seafaring and oceanic becoming that I grew up with, lured as a boy into a lifelong affair with surf exploration by a bootleg VHS copy of Bruce Brown’s Endless Summer (1966) and countless tales in Surfer magazine of perfect waves in far off places I could barely pronounce.  This sea change, which has so viscerally exposed the false promise of a paradise idyll, is the impetus for my current project to evolve a more situated and critically reflective aesthetics of surf culture in kind.

PhD studies on their own can be grueling enough. What do you gain from spending additional time on a community project like this?

My work with Save The Waves and the film festival is the perfect vehicle for me to be able pursue my research, keeping a pulse on surfer-led conservation efforts and a growing field of scholarship, while also giving me a platform from which to share my own work beyond the cloistered confines of the university setting or an academic journal.  That’s what I enjoy so much about the film festival – the opportunity to engage with and encourage people all over the world to become active stewards of their local environment through a community-building event.

Looking ahead, what do you dream the Film Festival will grow into?

Over the last five years, I have grown the film festival from a bi-coastal three-stop tour, with screenings in California and New York, to an international tour that spans five continents with over twenty screenings.  Although I have been supported by the staff at Save The Waves every step of the way, it’s generally me on the road, and I think I’ve stretched the map just about as far as it can go.  Currently, I’m only able to reach three to five thousand folks per tour cycle.  I’ve been working with the team at STW on a plan to scale this up to ten thousand viewers by 2020, with an audacious longer term goal of one million viewers by 2025.

That said, moving into 2019 and beyond, I will be spending less time on the road and focusing more on licensing opportunities and other strategic partnerships to increase viewership and overall impact of our festival by modeling other festivals with successful licensee programs, such as BANFF and Wild & Scenic.  We have fostered strong partnerships with other like-minded organizations, and I’m looking forward to growing these partnerships.

Can viewers expect something unique or special in this year’s festival?

A facet of the film festival that is newly developed this year and I’m very excited about is something we’re tentatively calling the “Grom Edit,” which we’ve geared towards an audience in the third to eighth grade range. This is essentially a film program that could be used in a science classroom to engage and educate kids about the dire state of our oceans’ health, and how the consumer choices that they and their parents make everyday impact the environment. As an educator, I believe this is a tool with tremendous potential that we are hoping to test with schools in the Bay Area in the near future.