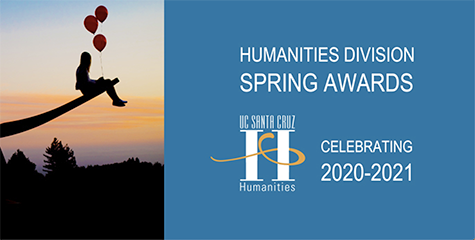 The annual event celebrates the achievements of students, faculty, and alumni of the Humanities Division over the past 12 months.

Held virtually this year, it included a new annual Distinguished Undergraduate Alumni Award—designed to recognize the transformative accomplishments of undergraduate humanities alumni who have led extraordinary lives and significantly impacted our world.

In addition to being honored, the awardee is also invited to give the keynote address at the annual awards ceremony, to share remarks about life beyond UCSC as a way to inspire future alumni in the Humanities.

Dean Jasmine Alinder presented the inaugural award to Stewart, who won the 2019 Pulitzer Prize for The New Negro: The Life of Alain Locke, his definitive biography of the father of the Harlem Renaissance. He also received the National Book Award for Nonfiction in 2018. 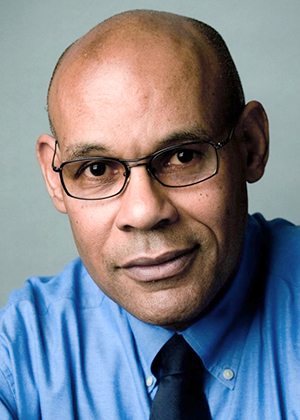 Now a professor of Black Studies at UC Santa Barbara, Stewart has spent his career studying the issues of race and culture as they relate to art, history, literature, music, and philosophy. His previous books include 1001 Things Everyone Should Know About African American History and Paul Robeson: Artist and Citizen.

A first-generation college graduate, Stewart received his undergraduate degree from UC Santa Cruz in philosophy, and his Ph.D. from Yale University in American Studies. He went on to become director of research at the Smithsonian Institution’s Anacostia Museum, a curator at the Smithsonian’s National Portrait Gallery, and a senior advisor to the Reginald Lewis Museum of African American History and Culture in Baltimore, Maryland.

“After I left Santa Cruz and went to Yale, I always found that I was so well prepared, even though Santa Cruz was then relatively unknown to the East Coast establishment, so I really look back on my years as an undergraduate at Santa Cruz as the most important in my formation as a scholar,” Stewart noted in his talk.

“The impact on me was huge,” he added. “I had always had kind of an intellectual bent of mind, but it was at Santa Cruz that I really became a critical race thinker—someone who did sustained research in philosophy, psychology, and political theory.”

Stewart spoke about the influence of the prominent UCSC professors he studied with, including Norman O. Brown, Herman Blake, and in particular, philosopher Maurice Natanson, who reached out and personally invited him to come to the campus. He also lauded the vibrant intellectual energy he found at the university.

“I thought it was particularly profound that the faculty at Santa Cruz seemed to welcome and want to learn from students as well,” said Stewart. “And so my whole conception of what it meant to be a thinker changed when I was at UC Santa Cruz. And I think UC Santa Cruz does that better than any other university I’ve been at—to create a sense in which you engage in long discussions, deep thinking with peers, you take difficult stands, you argue, and you have professors who trick you out of your intellectual laziness which I think can come very easily.”

The Spring Awards celebration also included the presentation of the 2020-21 Dizikes Faculty Teaching Award in Humanities to associate professor of philosophy, Janette Dinishak.

Established in 2002 to honor outstanding teaching by humanities faculty, the annual award is named in honor of the late emeritus professor John Dizikes, one of UC Santa Cruz’s founding faculty members. It was designed to celebrate the Humanities faculty’s commitment to excellence in teaching and its impact on undergraduate students.

“We can become better thinkers by careful study of the works of great thinkers,” said Dinishak. “Philosophy is at once a discipline with its own subject matter and a collection of methods and styles of thinking one can apply across disciplines. To learn philosophy is to learn ideas and arguments but also meta-cognitive skills and styles of thinking.”

“These simple reflections inform three of my overarching teaching aims: to excite interest in the subject matter of philosophy, to nurture students’ own philosophical responses to ideas they confront across the disciplines and in their everyday lives, and to become more careful interpreters of others’ ideas,” she added.

In addition to being honored with the Dizikes Award, the faculty winner is also invited to award a $2,000 scholarship bearing their name to a student who has demonstrated outstanding academic achievement. Dinishak chose Alyssa Tamboura, a graduating senior with a double major in Philosophy and Legal Studies. 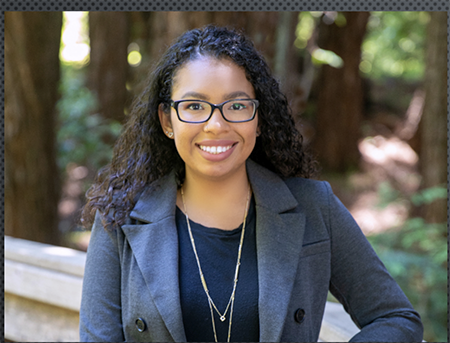 An active participant with UCSC’s Center for Public Philosophy, Tamboura founded Walls to Bridges, a student-run, volunteer restorative justice program that uses mediated meetings between those incarcerated and their familes as a way to reconnect them. She is a contributing author to Shut’em Down, an anthology of 20 stories from black women who have been impacted by racism in the workplace.

Tamboura also received the David A. Kadish Humanities Scholarship, which is annually awarded to an undergraduate student with financial need who displays a strong interest in the study of the humanities.

“I’m incredibly honored and grateful to receive the Kadish Humanities Scholarship, and I want to give a special shout-out to my professors, mentors and colleagues in the Philosophy Department— particularly Jon Ellis, Kyle Robertson, and Janette Dinishak,” said Tamboura. “Without you three, my time at UC Santa Cruz wouldn’t have been as amazing and incredible as it was.”

“This award is so helpful and means so much to me,” she added. “It will help me as I transition from graduating from UC Santa Cruz to attending Yale Law School in the fall.”