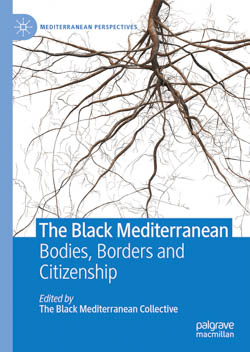 Assistant Professor of Sociology and Critical Race and Ethnic Studies Camilla Hawthorne coedited a first-of-its-kind new book called The Black Mediterranean, which examines the African diaspora within the region. Hawthorne and her coeditors are members of the Black Mediterranean Collective, an international coalition of scholars and thought-leaders across Italy, Portugal, Switzerland, the United Kingdom, Australia, and the United States.

The group initially formed in around 2016 to shed light on a refugee crisis in Europe. War and political and economic instability across the Middle East, North Africa, and sub-Saharan Africa were driving people to make their way to Europe across the central Mediterranean Sea in one of the largest mass movements in recent history.

The central Mediterranean passage is one of the world’s deadliest migration routes. In a single year, thousands of people can lose their lives at sea. Still, the migration process continues to this day, and political opposition has grown within countries like Italy. The members of the Black Mediterranean Collective saw a critical need to situate the refugee crisis and anti-immigrant sentiment within the context of colonial histories and enduring anti-Black racism. That’s part of what The Black Mediterranean sets out to do.

“We were all kind of taken aback by the fact that most of the mainstream media coverage was depicting this as a general humanitarian crisis, and no one was focused on the fact that large numbers of these refugees who were coming into Italy were Black,” Hawthorne said. “You can’t really tell the whole story without talking about anti-Blackness and the way that racism and legacies and reverberations of colonialism are caught up with border regimes.”

As a human geographer and citizen of both the United States and Italy, Hawthorne had long been interested in the unique geographies of the Black Mediterranean and how they shape current social and political issues in the region.

“When we talk about the Black diaspora in Italy, we’re talking about people who are descendants of colonial subjects on the African continent who have undergone traumatic experiences of migration, or their parents or family members have,” she said. “And they now face restrictive citizenship regimes, as well as the anti-Black racism of the Italian state, and all of those things are connected to each other.” Assistant Professor Camilla Hawthorne is a human geographer and citizen of both the United States and Italy.

Hawthorne wrote a chapter for The Black Mediterranean that focuses specifically on the racial politics of who and what can be considered “Italian.” She explores the example of an urban greenery project in Milan that planted banana and palm trees. Members of the far right in Italy quickly decried this as an “Africanization” of an iconic space, and protests loaded with anti-immigrant sentiment ensued. At counter-protests, demonstrators held up economically important plants brought to Italy from other parts of the world as symbols of support for immigrants. Both efforts revealed deeply problematic thinking about pathways to belonging.

“The counter-protests actually perpetuated this idea that the only way that Blackness can become assimilable in Italy is by having some kind of economic value to enhance the nation,” Hawthorne said. “So whether it’s the left or the right, there’s still a dehumanization of Blackness that’s happening within the normative logics around citizenship.”

Hawthorne hopes the perspectives captured in The Black Mediterranean can help advocate for major changes in discourse and policies related to the refugee crisis—and racial justice more broadly—within the region and beyond. In particular, she hopes Americans will recognize the many parallels between the ways in which issues of immigration, racial justice, and colonialism are interconnected in the Mediterranean and also in the United States.

“I’m convinced that the Black Mediterranean is not just another part of the world that we can study to see how different it is, but instead, as Americans, we can learn a lot from the way that political struggles are unfolding in the Mediterranean region,” she said.