A DREAM CALLED HOME is Grande’s lyrical and moving follow-up to The Distance Between Us. This memoir tells the story of her pursuit to become the first in her family to earn a college degree at UC Santa Cruz and become an award-winning and bestselling author. Grande shares an inspiring, personal account of what it means to find a home and place of belonging in America as a undocumented, first-generation Latina. 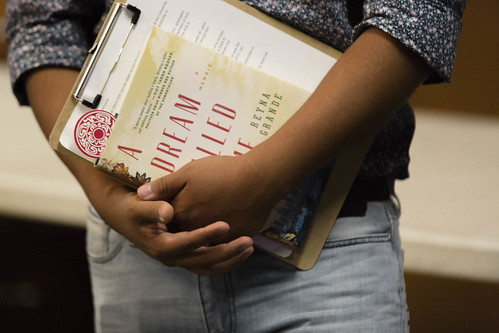 Reyna Grande is the recipient of the 2015 Luis Leal Award for Distinction in Chicano/Latino Literature. Her first novel, Across a Hundred Mountains (Atria, 2006), received a 2006 El Premio Aztlan Literary Award, a 2007 American Book Award, and a 2010 Latino Books Into Movies Award. Her second novel, Dancing with Butterflies (Washington Square Press, 2009) was critically acclaimed and was the recipient of a 2010 International Latino Book Award, Best Women’s Issues, and a 2010 Las Comadres & Friends National Latino Book Club Selection. She was also a 2003 PEN Center USA Emerging Voices Fellow. The Distance Between Us was a 2012 National Book Critics Circle Awards Finalist and has been selected by numerous city-wide read programs, including Rochester Reads 2018, MacReads 2018, One Book/One Michiana 2018, All Henrico Reads 2018, Timberland Reads Together 2017, Telluride One Book/One Canyon 2017, Estes Park One Book/One Valley 2017, Saginaw One Book/One Community 2016, Camarillo Reads 2016, Roswell Reads 2015, and One Maryland/One Book 2014, among others. To learn more about Reyna Grande and her work, visit www.reynagrande.com.

Presented by: Bookshop Santa Cruz and The Humanities Institute