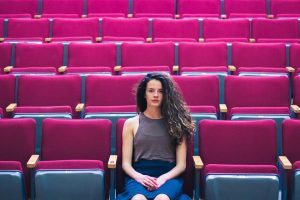 Ahead of Community Night on August 8, The Humanities Institute sat down with Sienna Ballou, a Graduate Student in the Literature Department at UC Santa Cruz and a 2019 Summer Public Fellow. Sienna is working with our community partner The Cabrillo Festival of Contemporary Music this year on their new music festival programming. The festival takes place from July 28 to August 11, and includes a range of concerts for long-time contemporary music lovers and new fans alike.

For a limited time, The Humanities Institute is offering free tickets to the Festival’s Community Night on August 8; be sure to book your tickets in advance using our special offer code.

You’re working with the Cabrillo Festival of Contemporary Music to bring us this year’s new music festival. What exactly does your role with the Festival look like?

I’m wearing a few different hats while working with the Festival Staff, all of which are giving me insight into arts nonprofit work. So far, I’ve been in the office learning as much as I can about what goes into making this Festival happen—from organizing accommodations for the musicians, to publicizing the various concerts and public events, and everything in between. I’ve also been involved in creating social media posts to ensure that people are aware of just how exciting this season is. I’ve found this aspect especially rewarding because it has meant that I’ve had to do thorough research about the Festival, tracking its history and becoming familiar with its audience, so as to accurately represent it.

Those are a lot of hats! Will your role change much throughout the summer? 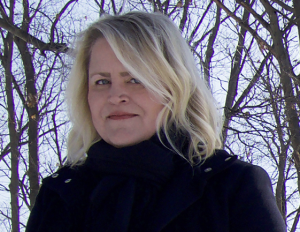 Kristin Kuster, composer of When There Are Nine, which premieres on August 2, 2019, at The Cabrillo Festival

As the Festival progresses, I’ll be acting as one of the Production Assistants. I’ll also be the point-person for Megan Levad, the Festival’s Poet-in-Residence. She’ll be leading free poetry workshops in collaboration with the Young Writers Program. The workshops will focus on poetry inspired by composer Kristin Kuster’s “When There Are Nine,” a libretto written by Levad about the life and work of Supreme Court Justice Ruth Bader Ginsburg. I’m really excited to be a part of these workshops and look forward to sharing the written works that come out of them on the Cabrillo Music website.

I’ll be documenting my experience in these various roles and my observations of the Festival processes and performances in an ongoing blog series. One of the next posts will cover conversations I’ve had with members of the Student Staff Program. These students, ages 16 to 24, have come together to compose and perform original works for the Student Staff concert. It has been neat to learn about their creative processes and get their perspectives on the Festival environment.

The relationship that this Festival has to its community is a special one, because as much as it prioritizes showcasing new, relevant, and incredible music, it also prioritizes community growth.

You’re a theater student. What skills and background are you drawing on in your work for the Festival?

As a student of dance, theater, and literature, I’ve developed a strong investment in interdisciplinary practice. I’ve been curious about the presence of gesture across all three of these disciplines. I’m thinking here of gesture as movement of and in the body—daily gestures as well as the gestures involved in artistic processes. I’m really looking forward to extending my interest in gesture to music through my experience with the Festival. Music is, of course, a very embodied practice. It’s full of gestures. The Festival has such an interdisciplinary and experimental nature, it’s the perfect space for me to explore this interest. The staff at the Festival also really care about the relationship between the audience and the works performed—creating an audience experience that goes beyond passive reception. The free open rehearsals and preconcert talks make active reception possible. For me, gesture is at the heart of communication between performers/artists and their audiences. We communicate with our gestures almost as much as with our words. As a member of the production team this year, I am bringing my investment in these ideas and passion for connecting people through artistic performance and education.

The staff at the Festival also really care about the relationship between the audience and the works performed—creating an audience experience that goes beyond passive reception.

Looking ahead to the festival program, which events stand out to you as “must sees” for the Santa Cruz community, and which are you most excited to experience yourself?

It’s really hard to single out concerts that I’m excited to experience, because they all offer such unique contributions to cultural histories, poetic images, musical ideas, personal narratives and themes of social justice. A couple of really exciting works that come to mind are Tan Dun’s Nu Shu: The Secret Songs of Women, which is a multimedia work centered around the only gender-specific written language. Nu Shu is a disappearing language that was developed and used by Hunan women in feudal China. It was passed down from mother to daughter and sung rather than spoken. The work comes out of Tan Dun’s field 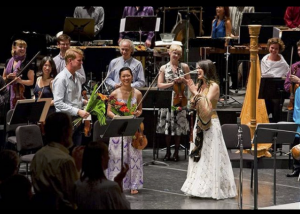 The 2019 Festival features a high proportion of female composers

research, and he describes it as a “kind of visual symphony in dialogue with sound, the voices [of women singing in Nu Shu], and with live orchestra acting in counterpoint of the calligraphy.” I’m also really excited for the work I mentioned above, When There Are Nine. These two, as well as many others, capture the female-centric nature of this season. Nine out of fourteen of the composers are women, which is very exciting. Each work is so different though. I really advise the community to go onto the website and check out the concerts for themselves. There is truly something for everyone.

Nine out of fourteen of the composers are women, which is very exciting.

Part of the philosophy behind our Public Fellows program is to bring the Humanities to the wider Bay Area community (and indeed, internationally). Can you tell us about the Festival’s Community Night on August 8th?

The Community Night concert is a pay-what-you-can event that aims to bring the work of incredible Festival musicians to the Santa Cruz community in a way that is accessible to all. The Music Director and Conductor Cristian Măcelaru and members of the Festival Orchestra created a concert of works showcasing the musicians as soloists and in small ensembles. There will be two world premieres (a piano piece and an oboe piece). I’m also really looking forward to Craig Morris’s performance of two Phillip Glass works on Flugelhorn and Trumpet. These are just a few examples of what will be a very exciting program. This event, along with the Church Street Fair, which brings local artists, businesses, Festival participants and community members together to celebrate the cultures of Santa Cruz, really captures the Festival’s mission of developing audiences for the 21st century. The Festival does this by making music and the creative processes that are involved in preparing works of such a high caliber available to the public. I think having an understanding of how and why something is created can really change a person’s relationship with a piece of art, and open rehearsals can facilitate that understanding. The relationship that this Festival has to its community is a special one, because as much as it prioritizes showcasing new, relevant, and incredible music, it also prioritizes community growth. In the setting of the Festival it’s clear that these two priorities are strongly linked.

For a limited time The Humanities Institute is offering free tickets to Community Night on August 8, 2019. Book here and use the code: 2019THI.

Read more about Community Night in our preview post, here.