Associate Professor of History, Alan Christy, led a group of dedicated UCSC undergraduate students, alumni, and donors around Okinawa in August. As the Director of The Gail Project, Christy has inspired hundreds of students to dig into the history of Japan and of Okinawa in particular. Inspired by a collection of photos taken in Okinawa in 1952-53 by an American Army Captain Charles Eugene Gail, The Gail Project has been a catalyst for a growing collaborative, international public history project that explores the founding years of the American military occupation of Okinawa. 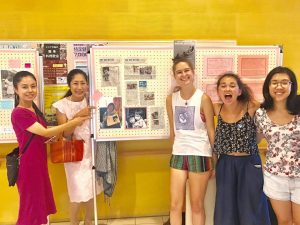 The project, now part of a broader effort titled the Okinawa Memory Initiative, uses the photographs as a lens through which to view the immediate postwar moment and the connections between populations throughout Okinawa, Japan, the United States and the entire Pacific region. Driven by the creative and scholarly work of UCSC undergraduates, the OMI encourages a broad public dialog across the pacific about the past, present, and future of the Okinawan-American relationship.

This summer, a team of 20 students travelled to Okinawa inspired to do historical excavation. The students sought ways to expand the story of postwar Okinawa through traditional methods, like archival work, as well as newer methods of public engagement. They brought equipment to “re-photograph” sites documented by Gail in 1952, trace the changes to landscape, and record oral histories with the aim of contextualizing the pictures and ultimately meeting subjects of the photos. Towards this end, the team hosted a pop-up exhibit to introduce people in Okinawa to the images and spark memories from the 1940s. Student teams have crisscrossed the island, tracing leads that can help them illuminate the history of Gail’s images. As Christy notes, “Each day turns up new leads thanks to lots of hard work and good media coverage.” Press across Okinawa has covering the project and publishing the images. 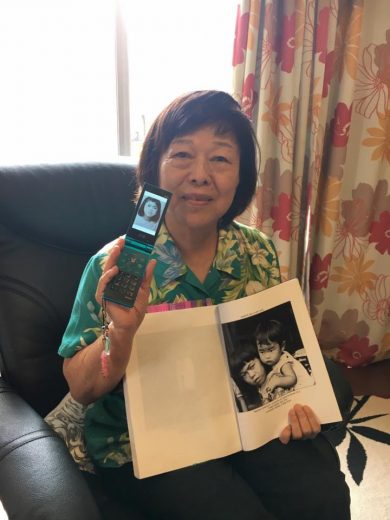 We are thrilled to announce that the project recently celebrated a major milestone. On August 21, 2018, representatives from the project interviewed Masako Arakaki, who identified herself as the little girl in one of the Gail photos (see right). She saw the re-printed image in her daily copy of The Ryukyu Shimpo and quickly recognized the distinct eyebrows and lip birthmark of her own face. She was eight years old when her picture was taken.

Although she did not remember being photographed by Dr. Gail, she explained that as a child she often wandered around the Futenma area carrying infants on her back, and most likely would not have understood what a camera was. Arakaki-san is the first person to be identified from one of the Gail Photos and – hopefully – this is just the beginning!

The Humanities Institute is a proud sponsor of the project and has incubated the Gail Project as part of the Center for the Study of Pacific War Memories since its inception in 2013.