Matthew Wagers is Professor of Linguistics in the Humanities Division at UC Santa Cruz. Recently, Wagers and fellow Professors of Linguistics Maziar Toosarvandani and Ivy Sichel were awarded a $400,000 grant from the National Science Foundation to support research on endangered languages. In the past, he was also part of a THI research cluster which investigated interactions between word and sentence structure (morphosyntax) and the sound structure (phonology) of words and sentences. Please join us in congratulating him on yet another outstanding accomplishment! 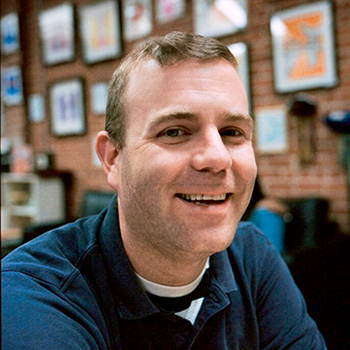 Two professors at the University of California, Santa Cruz, have been awarded the distinction of AAAS Fellow by the American Association for the Advancement of Science, the association announced this week. They are Matthew Wagers, associate professor of linguistics, and Fitnat Yildiz, professor of microbiology and environmental toxicology.

Wagers was recognized “for innovative research extending the methodology of experimental psycholinguistics to investigations of understudied minority languages.”

Wagers was principal investigator on a National Science Foundation-funded project to study Chamorro, an Austronesian language of Micronesia, spoken by 45,000 people in the Mariana Islands. He recently received a new NSF grant to work with speakers of indigenous Oaxacan languages in California and Oaxaca. This project explores a fundamental aspect of cognition: how language users refer to the world around them through their system of pronouns, and how this system is shaped by animacy (how much something is conceived of as alive or human). It also compares Zapotec, a language that has not been studied much by linguists, and modern Hebrew, a language that is much better understood.

Yildiz was recognized “for distinguished contributions to the field of microbiology, particularly for study of bacterial signal transduction pathways and molecular mechanisms of biofilm formation.”

Yildiz is a leading authority on the microbial communities known as biofilms, which grow on surfaces and are enclosed in a protective matrix. Her lab focuses on biofilm formation and its consequences in the infection cycle of the cholera pathogen Vibrio cholerae, which causes periodic, seasonal outbreaks of disease in many parts of the world.

Biofilms are important in causing cholera infections as well as in the survival of cholera bacteria in the environment. Studies from Yildiz’s lab have significantly advanced the understanding of the mechanisms and regulation of biofilm formation and what makes the biofilm more infectious than free-swimming bacteria. These findings help pave the way for developing strategies to predict and control cholera epidemics, and may also help in identification of novel drug targets for inhibiting biofilm formation and treating infections.

Election as a AAAS Fellow is an honor bestowed upon AAAS members by their peers. This year, 489 members have been awarded this honor by AAAS because of their scientifically or socially distinguished efforts to advance science or its applications.

The 2020 AAAS Fellows will be formally announced in the AAAS News & Notes section of the journal Scienceon November 27, 2020. A virtual Fellows Forum—an induction ceremony for the new Fellows—will be held on February 13, 2021.