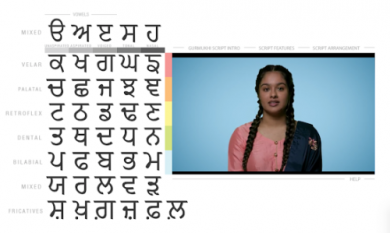 ‘Punjabi Without Walls’ is a series of interactive software modules to help students learn how to read and write the Gurmukhi script.

The first online Punjabi language course for University of California students that launched earlier this year is a collaboration of several UC campuses, centered on UC Santa Cruz and UC Davis.

Punjabi language instruction has been offered at UCSC since 2012, currently the only course in a modern South Asian language on campus. Only UC Berkeley has offered Punjabi language for a longer continuous period. Now, a complete three-quarter online curriculum is available to UC students across the system.

Punjabi is spoken by about 130 million people worldwide and is the third most common language in California’s Central Valley, home to one of the largest Punjabi communities outside of India. 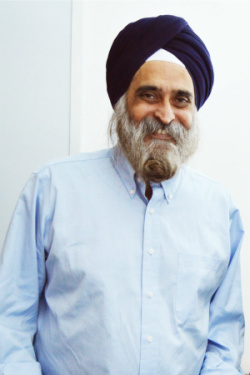 “This has been a big unmet need for a significant minority group in California,” said Nirvikar Singh, UC Santa Cruz distinguished professor of economics, who helped bring the online course to fruition as a co-principal investigator on the project. Singh, besides being an economist, was the first holder of the Sarbjit Singh Aurora Chair in Sikh and Punjabi Studies at UCSC, appointed in 2010. Last year, Guriqbal Sahota, associate professor of literature, succeeded him as chair.

Punjabi language teaching on campus has been enabled by income from the Guru Nanak Heritage Fund, an endowment that was raised by the Bay Area Sikh community, and placed at UCSC in 2012, through the efforts of Singh, and of Inderjit Kaur, a specialist in South Asian musical cultures, including Sikh musical worship. She is assistant professor of music at the University of Michigan, as well as a research associate in music at UCSC. Singh developed the initial Punjabi curriculum at UCSC, using the UC Berkeley program as a foundation.

“This is our heritage, this is something we needed to make happen,” said Singh, whose grandfather wrote novels and non-fiction in Punjabi, and whose father translated a major history of the Sikhs from English to Punjabi. Singh said he learned the language as a child in India, but was taught Hindi and Sanskrit in school, without the option of formally studying Punjabi, even in a city with a large Punjabi-speaking minority. “For complicated historical reasons, Punjabi as a literary language has tended to be marginalized,” he noted.

The course is called Punjabi Without Walls and is a complex muliti-media project designed around a series of interactive software modules to help students learn how to read and write the Gurmukhi script and also become comfortable holding basic conversations in Punjabi. To practice writing, a mobile app allows students to trace characters with their fingers and receive feedback on accuracy.

Technical and video production for the grammar components of the course sequence were done at UC Santa Cruz, led by Michael Tassio and UCSC’s online education office, along with Daniel Rudin, a doctoral student in Film & Digital Media. And it all happened beginning last summer after the SARS CoV-2 pandemic closed the campus, sent everyone home, and turned teaching and learning into an online practice.

“We were able to leverage the expertise of multiple campuses,” Tassio said. “It’s been an extraordinary effort from so many people.” Tassio’s online learning office expanded from supporting 15 courses at the beginning of 2020 to supporting several thousand during the pandemic.

The online course was developed with contributions from multiple UC campuses, with the lead being taken by Davis, where more than 800 Punjabi American students are enrolled, and Santa Cruz, with its active Punjabi language program. Berkeley, Santa Barbara, Riverside, and Irvine all made contributions in different ways.
Principal funding came from the UC Office of the President’s Innovative Learning Technology Initiative, with support from campus funds and private donors. At UC Santa Cruz, Singh used income from the Aurora chair to create an all-UC online version of a course, “Introduction to the Sikhs,” which he developed and has taught at UCSC for a decade. The two-unit course will complement the language instruction by providing contextual information on the Sikh community, for whom Punjabi is also the language of sacred texts.

Another key contributor to the overall effort is UC Santa Cruz lecturer Arshinder Kaur, who has taught Punjabi on campus since 2012, and has an extensive background in Punjabi language teaching and Punjabi literature. The members of the development team included two other UCSC graduate student researchers and a UC Riverside doctoral student, Tejpaul Bainiwal, who became so committed to the project’s successful completion that he arranged additional funding from his home campus. Numerous faculty and students from Davis and other campuses, as well as language experts from the community, participated in the project.

The course-development team is adjusting and refining the software modules and videos based on student comments, now that the course sequence is in its second quarter of being offered. The curriculum is focused on language, but includes aspects of Punjabi culture, such as food, health, festivals, and social issues.

“Language is absolutely important for a people,” Singh said. “It is part of their identity. This is part of me, this is us as a community.”