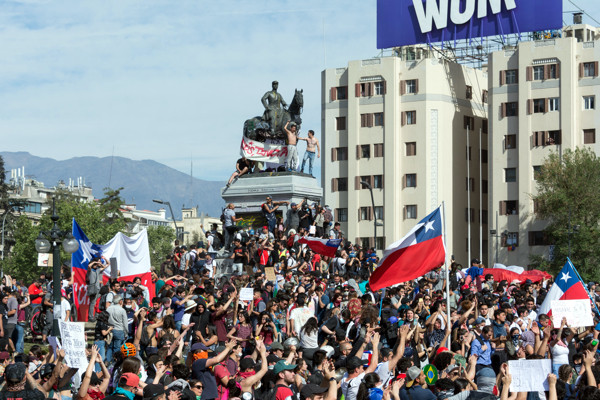 Before she began her last year as an undergrad at UC Santa Cruz, Monica Estrada Arias had been reading voluminously about human rights issues in the United States and beyond.

While she says her mind was afire with the theoretical underpinnings of human rights across the globe, she yearned for a concrete and impactful outlet for her accumulated knowledge.

She found the opportunity to apply her theoretical knowledge at the Human Rights Investigations Lab, directed by Sylvanna Falcón, an associate professor of Latin American and Latino studies and a human rights researcher.

The Human Rights Investigations Lab at UC Santa Cruz has partnered with UC Berkeley’s Human Rights Center (HRC) to train students in the emerging field of digital verification, which uses “open-source investigation” tools and techniques to find and verify facts. Students in the Berkeley and UCSC labs learn to sift through social media postings, news media footage, satellite imagery, Google Maps and other sources available on the internet to investigate human rights abuses in the Americas and around the world. HRC opened its lab in 2016 and UC Santa Cruz established its lab in 2019.

Most recently, these two Human Rights Investigations Labs collaborated on open source research focused on the human rights crisis in Chile, which began with massive anti-government demonstrations a year ago that prompted a swift and sometimes brutal government crackdown on protestors.

“The massiveness of the protest captured the students’ imagination and their attention,” Falcón says. “There was a feeling of being a witness to history and with these new open source research skills, a deep desire to do something.”

That something was the meticulous composition of three separate reports about the mass protests that began on October 19, 2019 — the first of which is a joint UC Santa Cruz and UC Berkeley visual investigation, which provides historical context and compares and contrasts the perspective of protestors and government leaders about the underlying societal factors that led to the mass demonstration. The second report from UCSC’s Investigations Lab explores the lives and deaths of 25 people who were killed during the protests in an attempt to determine whether there was a system-wide use of violence and intimidation by Chilean authorities. And the last investigation, also from UCSC’s lab, explores the final week in the life of activist Germán Arbuto.

Germán Arbuto was a young man who posted prolifically on various social media platforms during the protests, sharing videos and anecdotes about his and his fellow activists’ participation in mass protests in the rural province of Curico in Central Chile.

Arbuto died under allegedly suspicious circumstances in a jail cell on October 26, 2019. His final post to Facebook the day before read: “I failed but the struggle continues!”

Even though the authorities ruled his death a suicide, his family, friends and fellow activists cast doubt on the official rendition of the death expressing suspicion that he had been killed by Carabineros (the Chilean national police.)

“It was an important case to highlight,” said Arias, who compiled the report by combing through Arbuto’s copious social media postings in the week that led up to his death. “There were so many questions including was he documenting all of this on purpose, leaving a virtual trail behind in case of his death?”

Arias said she is skeptical of the official story ruling his death a suicide, pointing to disparities in how the incident was covered in the mainstream press and how it was talked about on the social media accounts of Arbuto’s family and friends.

Arias says that she can’t say definitively either way, and that her role as an open-source investigator is to compile evidence so that those better positioned to interview relatives, friends and the authorities are better equipped with the facts on the ground.

“We exclusively use whatever is publicly available online and this can have its drawbacks,” Arias says. “Even though we don’t interview people as part of open source research, we can still gather valuable information,” Falcón says.

“We systemically collate vast information into a chronological order to create a semblance of what actually happens,” she says.

This information can be valuable to human rights organizations or could even play a role in legal cases as relatives of those assailed attempt to seek justice. 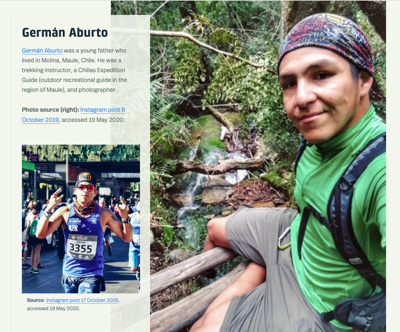 ArcGIS StoryMap offers a virtual timeline of the last week of Germán Aburto’s life — starting on October 19, 2019 until the day of his death on October 26, 2019.

The three published reports on the mass protests in Chile were driven internally by the students, according to Falcón. So she and her UC Berkeley counterparts worked together to support them.

Graduate student Francesca Romeo is one of many students who initiated the lab’s deep dive into the mass protests in Chile.

She helped author and provide imagery for the report called “Chile at the Threshold” which investigated the circumstances surrounding the deaths of 25 different individuals during the turbulent days that followed the first eruption of protests on October 19, 2019.

“It was a deeply emotional experience for us, one that brought up a lot of ethical issues for us,” Romeo says. “I think we all struggled with how to best represent these lives that had been lost.”

The difficulties weren’t necessarily restricted to the emotional and ethical aspects of honoring the lives of 25 people who died, but also trying to do so in a manner that put together a coherent timeline that could provide insight into the activities of protestors and the authority figures seeking to control or curtail those protests.

“Open source work is like good research or good journalism in that while you are never going to get pure objectivity, you have to try and expose the facts as they are lived on the ground,” Romeo says. “I think it’s all about finding disparate constellations of information and trying to cohere a whole.”

For instance, one of the 25 individuals involved in the report was a 33-year-old woman named Valeska Carmona Lopez, who was originally thought to have been targeted as a protestor and shot in the neck by a Chilean soldier.

In fact, the open-source investigation revealed Lopez was the victim of a common crime that occurred in proximity to ongoing protests.

“This is why you have to be careful about what you believe on the internet,” Falcón says.

In a third report, “Human Rights Crisis in Chile: A Digital Inquiry,” Falcón says, “The UC Berkeley and UC Santa Cruz teams collected and organized 358 photos, videos, and social media posts to shape the investigation and the report both chronicles the justification of excessive police violence against protestors by Chilean authorities and a timeline of protest activity to explain why people were in the streets.” “There were sprouts of protests throughout the decades, but the 2019–2020 protests just shows how the people of Chile are really tired of economic inequality,” Arias says.

For Arias, the opportunity to conduct open-source investigations into Chile’s societal issues past and present provided a vital window into the issues of human rights that extend beyond the borders of the United States. Involvement with the Human Rights Investigations Lab enabled her to apply skills that make a positive difference in those very issues.

“Open-source investigation is where I can contribute to positive change,” says Arias, who has just started a new job in open source research.

For Falcón, such a development underscores the dual purpose of the Human Rights Investigations Lab — to produce compelling reports that provide insight into human rights issues across the Americas and the globe, while training the next generation of human rights advocates in the emerging field of digital verification and open-source investigations.

“Open-source investigations are the new terrain for human rights accountability,” Falcón says. “And through our labs, University of California students really understand their capacity to enact change.”