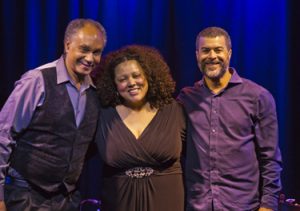 The occasion was both a celebration of UNESCO’s International Jazz Day and UCSC’s annual alumni weekend.

They talked about the African American roots of jazz and moved on to the political nature of the art form.

“I think jazz has always been very much a political art form,” Stovall added. “It’s the politics of having African American culture showcased this kind of way. Having black players on stage was a political act. Or just the idea of performing before a mixed audience racially, which was something that you were not supposed to do.”

“Not following the notes as written is also political,“ added Nalley, who in addition to her burgeoning singing career is now pursuing a Ph.D. at UC Berkeley (her dissertation is titled “GI Jazz”).

“There’s always a lot of politics about just being on stage,” said Nalley. “It’s very hard for women to carve space in the jazz world. I recently gave birth to two beautiful girls, and I was very acutely aware that I’m from the first generation that’s allowed to perform onstage visibly pregnant and not have them cancel my gig or find a substitute.”

One audience member asked how to get jazz greater exposure beyond the elite. But Nalley questioned the assumption. “There’s a lot of great music in poorer neighborhoods where a lot of white people won’t go, so they just don’t know about it,” she responded.

“But she ultimately agreed with Porter, who pointed out that jazz needs to be taught in the schools. “Its one of those essential things that will continue to build this art form,” he noted.