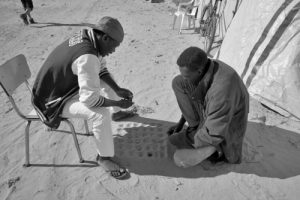 Refugees in a tent city in Calais, France play an African version of the game mancala in September. (Lewis Watts — Lewis Watts Photography)

At the time, the camp, near the Port of Calais, held more than 3,000 refugees from Africa and the Middle East, including Syria. Its inhabitants hoped to cross into the U.K., often seeking help from illegal human traffickers.

Watts, a UC Santa Cruz art professor emeritus, will speak about his photo series of the migrant camp Friday morning at UCSC. He will be joined by Salvadoran reporter Oscar Martinez, who speak about “The Beast,” a Central American freight train that carries stowaways seeking refuge in the U.S.

The event is part of a free speaker series on migration, which includes a Thursday film screening at Santa Cruz’s Rio Theatre and a May conference at UCSC.

For Watts, migration has been a theme of his work for the past 30 years. He said he was surprised by the Calais migrant camp — though it was a former landfill, conditions were better than expected. Volunteers and migrants had set up stores, a theater and nightclub and a makeshift library, he said.

“Nobody was in rags,” said Watts. “People did seem they were being fed. I think that they said after I left the population of the camp doubled, so I think things got hairier. But I think that was what was interesting — the survival of the sort of drive, that people did not want to be there necessarily but they were making the best of it.”

The refugees were not cut off from the world, he said. Generators were humming, constantly charging cellphones. People checked their Facebook accounts. The town was a few miles away and people would walk there to wire money.