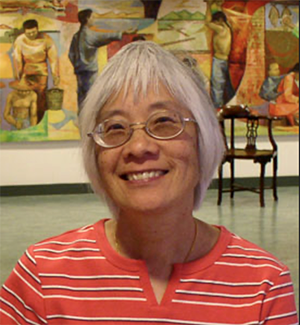 She was co-author of the landmark 2010 book, Angel Island: Immigrant Gateway to America, the official publication commemorating the 100th anniversary of Angel Island Immigration station in San Francisco Bay, offering a comprehensive history of West Coast immigration policies that excluded Asians and barred them from becoming naturalized citizens.

Yung’s research on Angel Island was personal; her father was a detainee.

She was also the author of Unbound Voices: A Documentary History of Chinese Women in San Francisco. Drawing upon an intimate collection of letters, poems, autobiographies, newspaper clippings, and oral histories, the book portrays the lives of 40 Chinese American women from the late 1800s through World War II, creating a picture of their ability to make a home for themselves in America, despite severe racial, economic, and cultural constraints.

Unbound Voices was written as a sequel to Yung’s 1995 book, Unbound Feet, a 10-year project that earned the 1996 National Book Award in History from the Association of Asian American Studies. She is additionally the author of Chinese Women of America: A Pictorial History and co-author of Island: Poetry and History of Chinese Immigrants on Angel Island, 1910-1940.

“People contribute to diversity in different ways,” Yung observed. “For me, my contribution is to do research and add the voices of Chinese American women to the tableau of history.”

Born in 1946 and raised in San Francisco Chinatown, Yung taught at UC Santa Cruz from 1990 until her retirement in 2004.

“She was a brilliant teacher, inspiring her students, and mentoring scores of them. She was an outstanding scholar, and her published works provided us with some of the most important historical material on Chinese and Chinese American women’s history.

“In the early 2000’s, Judy and I worked together to educate the campus and community on the importance of affirmative action, its history, its need, and its connection to the 1960s Civil Rights movement, and the formation of Ethnic Studies, Black Studies and Women’s Studies,” Aptheker added. “I treasured Judy as a colleague and friend, and deeply mourn her passing.”

Yung married Eddie Fung in 2003, the only Chinese America soldier captured by the Japanese in World War II. She was introduced to Fung by a military historian while doing research on Asian American men who had been in the U.S. Army and were taken as prisoners of war. Yung did nearly 50 hours of interviews with Fung that eventually led to a book titled The Adventure of Eddie Fung: Chinatown Kid, Texas Cowboy, Prisoner of War. He died in 2018.

“Judy Yung was a pioneering scholar in Chinese American and women’s history,” noted UC Santa Cruz associate professor of history Alice Yang. “She played a critical role in teaching and mentoring many undergraduate and graduate students in Asian American studies. She also recruited and supported faculty and staff, myself included, as we tried to mount a curriculum in Asian American studies.

“I’ve heard from countless faculty, staff, and alumni about how heartbroken they are at her passing and am working with this group and Judy’s family to organize a celebration of her life and to establish a memorial fund to honor her contributions to UCSC and the field of Asian American Studies.”