On May 16, 2018, our speakers challenged the centrality of 1968 in the world’s collective memory of revolutionary change. Instead, they offered “the long sixties” as a decade of violence and upheaval. From student movements in Mexico City, to the transmission of Maoist narratives across borders, and the never realized futures of post-colonial Africa, we learned about the forces that fought for a new world and shaped our present in so many ways. 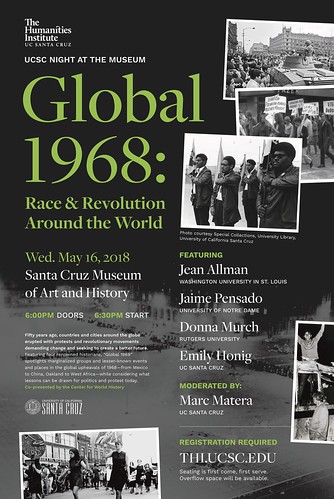 Photography Exhibit:
Included in the evening’s event was a pop-up exhibit of images from a 1968 photography project launched by artist Ruth-Marion Baruch to document the people and the work of California’s Black Panther Party. The now-iconic photographs she and her husband Pirkle Jones took of the Panthers were both celebrated and criticized for their sympathetic portrayal of a maligned community. Black Panthers, 1968 is one of many projects revealing Baruch’s and Jones’s commitment to art and social change that are preserved in their archive at UC Santa Cruz’s Special Collections & Archives.