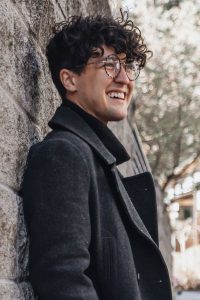 Jonah Gertz (Porter ’21) was an an undergraduate in the History Department. Gertz’s research explored the post-WWII occupation of Japan and the development of what Gertz calls “Japanese narco-culture.”

In this profile, Gertz looks back on his experience as a Senior writing a thesis in the Humanities and how that experience helped shape his future plans. Gertz was named a THI Undergraduate Research Fellow from 2020-21 to support his research. He also received the Bertha N. Melkonian Prize, an annual add-on award for the student who submits the top proposal for The Humanities Undergraduate Research Fellowships.

Jonah Gertz admits that there were times in the past four years when he tried to choose between his two academic passions: intensive history and music. In the end, he could not force himself to make this impossible choice.

“It was hard to justify any such change when I was surrounded by so many different opportunities to grow as both a historian and musician,” Gertz said. “I guess, at the end of the day, I put a lot on my plate because it was offered at the buffet, but I definitely would not have been able to finish it all without the help of my friends at my table.”

Following two passions at once was not easy for him.

“Balancing my diverse academic interests was a constant exercise in self-regulation and, frankly, a fairly exhausting one at that,” he said.

But the assistance and encouragement of faculty mentors made him realize that he was taking the right path.

Gertz was thrilled when two of his academic heroes, East Asian Studies Program Director Noriko Aso and Distinguished Professor of History Gail Hershatter, agreed to advise him when he first proposed his thesis, “Japan and Methamphetamine: the Afterlife of Occupation and the Hiropon Age,” examining the historical development of Japanese narco-culture.

“When they signed on to guide me in my thesis-writing process, it amplified my passion for the project by a factor of 10,” he said. “My development as a researcher, writer, and historian over the course of the last year can largely be attributed to their diligence in mentoring.”

“My development as a researcher, writer, and historian over the course of the last year can largely be attributed to their diligence in mentoring.”

During the research process, Gertz was surprised by the negligence of the post–World War II occupation government in protecting the national health of Japan.

On a different note, as a musician in UCSC’s Electronic Music program, his greatest highlight was working on the soundtrack for Love Heist Romeo, a student game project helmed by the most talented game design students he’d ever met.

“Over the course of co-composing the music, I have received unparalleled creative support and grown so much as a musician under the guidance of both my development teammates and UCSC faculty,” said Gertz.

In fact, he loved the process so much that he decided to seek a career in the field and is pursuing a masters of science in sound and music for interactive games next year at Leeds Beckett University in England.

Now that he’s about to say goodbye to campus and travel to another country, he can see how much he changed in the past four years.

“When I first came to UCSC, I had interests, but little concrete ambition. During my time as a Banana Slug, I have been taught by inspiring professors, met incredible people, and spent so much time aimlessly walking around redwoods,” Gertz said. “I can’t exactly say how it happened, but some combination of those three things provided me with a really solid framework to plan the rest of my life.”