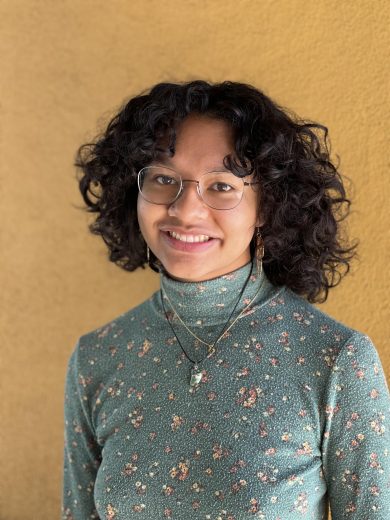 Bostic’s research project “Santa Cruz’s Elusive Figure: London Nelson” explores the legacy of London Nelson, a Black farmer and cobbler who has been called Santa Cruz’s first Black philanthropist. As Bostic explains, “I did my best to research his life as well as explore questions of his long-lasting legacy within Santa Cruz because I believe researching Nelson’s life is integral to uncovering Black history within Santa Cruz.”

Bostic will receive an award for her research at the Humanities Division Spring Awards on June 3, 2022. Ahead of her award, we reached out to learn more about her locally-situated and impactful research.

Good afternoon, Theresa! And thank you for talking with us about your research. To kick us off, can you give a brief synopsis of your research project? 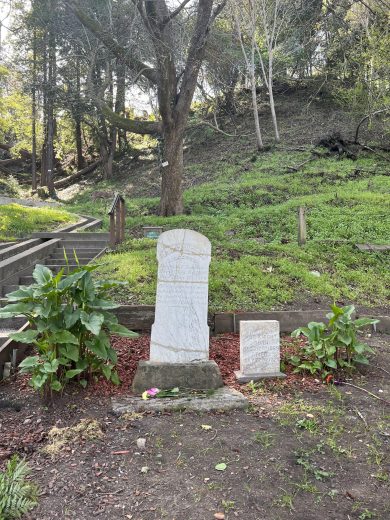 Thank you so much for approaching me for this interview, I’m super honored to be featured as a THI Fellow. My research is focused on the life of London Nelson, a Black farmer and cobbler who at the end of his life donated all of his money toward the Santa Cruz School District in the early nineteenth century. In doing this, he was accredited for being Santa Cruz’s first Black philanthropist. I did my best to research his life as well as explore questions of his long-lasting legacy within Santa Cruz because I believe researching Nelson’s life is integral to uncovering Black history within Santa Cruz. As one of only two Black residents living in Santa Cruz in 1856 (the other being David Boffman), researching Nelson’s life plays a pivotal role in also contextualizing Black life during the nineteenth century.

Utilizing ArcGIS, a software program supported by the David Kirk Digital Scholarship Commons at UCSC’s McHenry Library, I created a Story Map as a visual tool to help illustrate my research. In addition to this tool, I also utilized the Special Collections and Archives at McHenry Library to find books mentioning Nelson and Black history within Santa Cruz. With the help of the THI Undergraduate Research Fellowship, I was able to develop an independent research project, but I have the help of many others to do all of this research. I had the Head of Special Collections & Archives at UCSC, Teresa Mora, help me find the material I needed to learn more about Nelson and my mentor, Associate Professor for the History Department, Catherine Jones, assist me throughout the construction of this project. I also had the help of other historians and researchers. Luna HighJohn-Bey and Gabriella Middlebrooks from the London Nelson Legacy Initiative lead me toward accessing the archives at the Santa Cruz Museum of Art and History. I’m immensely grateful for not only THI, but also the many resources I had to help me in the development of this project.

So interesting! How do you think your research can help us rethink and expand our understanding of Santa Cruz history?

There’s an assumption that there is not a prominent Black community in Santa Cruz, which couldn’t be further from the truth…the historical ties of Black people within Santa Cruz go back all the way to the Gold Rush of 1849.

I’ve heard from fellow students and especially students of color that they’ve felt–or currently feel– ostracized within Santa Cruz as it’s a predominantly white area (more than 50% of Santa Cruz County’s population is White according to the U.S. Census Bureau). Especially since the number of Black identifying students within UC Santa Cruz itself is so low (i.e. Black undergraduate students make up 4.7% of the ethnic composition of Undergraduates as of Fall 2021 from UCSC’s Undergraduate Admissions website), there’s an assumption that there is not a prominent Black community in Santa Cruz, which couldn’t be be further from the truth. Aforementioned historians HighJohn-Bey and Middlebrooks from the London Nelson Legacy Initiative helped me discover that the historical ties of Black people within Santa Cruz go back all the way to the Gold Rush of 1849. In fact, Nelson himself was brought from North Carolina to California in 1850 alongside another enslaved person, Marlborough Nelson, by their enslaver Matthew Nelson, who sought to find gold and fortune along the American River in Sacramento. It was through manumission that Nelson was awarded his freedom from enslavement, leading him to eventually arrive and reside in Santa Cruz by 1856, even though he was already free based on California’s Constitution in 1850.

White supremacy was still rampant throughout California despite California being admitted to the Union as a free state under the Missouri Compromise in 1850. There were still proslavery politicians passing racist legislation to undermine the idea of California being a free state. For instance, the Civil and Criminal Procedures Acts prohibited Black people and other people of color (such as American Indians) from being able to testify within the judicial court. In not being able to testify, enslaved Black people weren’t able to prove that they entered California after the state constitution was passed, barring them from gaining their freedom. California’s own Fugitive Slave Law of 1852 reinstated Black people as property in addition to the ban on testimony by Black people. To combat both the Civil and Criminal Procedures Acts and California’s Fugitive Law of 1852, mass mobilizations of both free and enslaved Black people advocated for Black abolition through organizing Colored Conventions within California. These Colored Conventions solidified the idea that there were many Black communities within California. For instance, the first Colored Convention in California happened in Sacramento in 1855, proving that if there was a Black community within Sacramento, then there was definitely a Black community within Santa Cruz, which is only about a three hour car ride from Sacramento. (For more on the history of the Colored Conventions, see The Colored Conventions Movement: Black Organizing in the Nineteenth Century by authors Sarah Lynn Patterson, Jim Casey, and Gabrielle P. Forman, University of North Carolina Press, 2021).

Your project has a compelling digital component. How do you use digital technologies like ARCgis to enhance your historical research? Why are these methods particularly compelling and useful to tell this story?

The purpose of ARCgis is to outline and map information to make it accessible and digestible for audiences to process. Using their Story Map application, I’ve been able to add visual elements to my Story Map such as a photo of the Evergreen cemetery where Nelson’s gravestone is or a newspaper clipping from UCSC’s microfilm archives at the McHenry Library. I chose to show my research through this virtual medium because I believe it is more engaging in comparison to reading an academic paper with heavy jargon which might intimidate people who aren’t familiar with academic writing. I also personally enjoy seeing images alongside words as the combination of powerful imagery and content makes me retain information better. In addition to providing sentimental impact, pictures also work as tangible evidence of history. It’s compelling to demonstrate my research not only through my words, but also through the sources I’ve found because they provide proof of the stories untold.

The local history you are researching is inscribed on the landscape of Santa Cruz in several interesting ways. How does your research project interact with public space and public sites of historical memory? 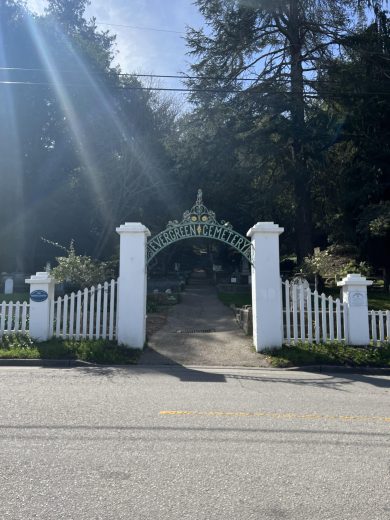 The Evergreen Cemetery where London Nelson is buried.

I scoped out resources within UC Santa Cruz as well as within the wider Santa Cruz community to develop my project. At UC Santa Cruz, I utilized the Special Collections and microfilm archives, and visited the David Kirk Digital Scholarship Commons at McHenry Library with the help of student workers at the circulation desks. Off campus, I was able to visit Evergreen Cemetery to witness Nelson’s gravestone myself as well as search through the archives at the Santa Cruz Museum of Art and History located within Downtown Santa Cruz. Historians HighJohn-Bey and Middlebrooks helped me navigate both of these spaces. Especially since most of my roles and responsibilities are on campus, I spend more of my time at UC Santa Cruz than exploring the city of Santa Cruz. Luckily, working on this project provided me the opportunity to get out of my comfort zone and not only visit spaces full of information and resources, but also spaces containing histories and memories.

The Evergreen Cemetery serves as both a public space and public site of historical memory. For instance, it holds the Chinese Gate settled within a section of the Cemetery meant to memorialize Chinese immigrants who came to Santa Cruz. Intense anti-Chinese sentiment accompanied the growing Black community in nineteenth-century Santa Cruz. Elihu Anthony, for instance, who was a prominent founding father of Santa Cruz, served as President of the Santa Cruz branch of the Workingmen’s Party of California, a group that introduced anti-Chinese sentiments and played a large influence in the development of the Chinese Exclusion Act of 1882. In discovering spaces such as Evergreen Cemetery, it’s necessary to trace back the historical ties to the community to fully understand the significance of the space itself. In contextualizing these spaces, we’re also given the opportunity to think more critically about how these spaces have changed since their inception, allowing us to analyze their transformations as well.

How has your experience as a THI research fellow influenced your future plans and goals once you graduate UC Santa Cruz?

Being awarded THI’s Undergraduate Research Award was affirmation that my research is important and worthy enough to share with others.

To be honest, THI has given me such a huge ego boost in giving me the validation I needed to pursue my journey toward becoming an historian. Being awarded THI’s Undergraduate Research Award was affirmation that my research is important and worthy enough to share with others. Especially with the historical lack of diversity within both the disciplines of History and Sociology, I plan on bridging this gap through applying to graduate school right after I finish my undergraduate education. So as of now, it’s imperative for me to develop as much independent research as possible to demonstrate a willingness to learn and gain experience in preparation for graduate school.