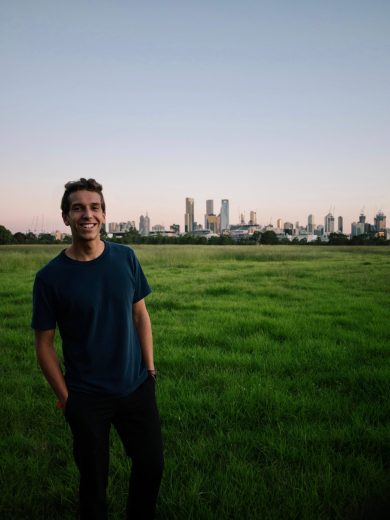 Jacinto Salz is a Film and Digital Media major at UC Santa Cruz. Salz’s current project is a medium-length documentary titled Birthright, which aims to highlight an array of different perspectives on the Taglit Birthright Program. In his film, he explores how Palestinian, Israeli, and Jewish diasporic responses to the program are shaped by the region’s history and politics.

In April, we spoke with Salz to learn more about his work and research interests. This year, he was selected as a THI Undergraduate Research Fellow in order to pursue his project. In our interview with Salz, we discussed his work on the documentary, the personal dimensions of its focus, and the history of the program itself.

Your project, titled “Birthright,” sounds like really interesting and important work. To start us off, would you mind just telling us some more about it? What would you like readers to know about birthright and your perspective on its political function?

Birthright is a medium-length documentary that overviews the perspectives of people living in Israel and Palestine. It is in many ways a response to the Taglit Birthright program – which takes young Jews from around the world to Israel for an all-expense-paid 10-day tour. On the one hand, the Taglit Birthright allows diasporic Jews to see Israel and a side of Jewish culture they may not know, but on the other hand, it omits Palestinian perspectives. It’s also known that the Birthright Program was expressly started to try and get young Jews to intermarry with each other. The purpose of the documentary is to show perspectives that are omitted and allow people in the region a platform to share their stories.

What drew your interest to this topic? And what has it been like working on such a charged and timely piece of research?

It has been incredible to work on this project, which is very meaningful to me and others. It feels like the way that I’m doing my part in making the world a better place.

Growing up as a Jewish American, I had often heard about the Birthright program, and I had even planned to go with some of my childhood friends. But over the years and after learning more about the conflict, I decided that I could not turn a blind eye to injustice happening in Palestine. That’s how the Birthright documentary was born. To reach a younger audience, there needed to be an outlet for folks like myself to learn more about what it means to be a Jewish American and to learn about the present story of the region in a way that is accessible and not overly political. It has been incredible to work on this project, which is very meaningful to me and others. It feels like the way that I’m doing my part in making the world a better place.

You’re now in your 4th-year as an undergraduate and wrapping up your time here—what have been the highlights of your time at UC Santa Cruz? Have you enjoyed your learning experiences in the Humanities Division?

I have really enjoyed my time at UC Santa Cruz. It’s a beautiful school with a lot of really incredible people. One class that really helped me with this project in particular was History of Zionism with Professor Nathaniel Deutsch. His class was an amazing overview of the subject and helped me learn a lot about a topic that would have been insurmountable on my own.

That’s great to hear Jacinto! How has the intellectual environment of UC Santa Cruz more generally shaped your time here as an undergraduate?

I think Santa Cruz is an amazing place for students to develop their own conception of the world and how they want to live in the world. That’s the part of my college education that I wasn’t expecting to receive, all the background and all the perspective that I would gain throughout my studies.

In a year deeply shaped by the conditions of the global pandemic, how have you been getting along with your project? What do you do to try to stay focused and on target?

In all honesty, the pandemic is the main reason that the documentary will be finished soon! I finally had time to work on it. I also definitely learned to appreciate alone time, and I’ve been able to spend more time outdoors so it really hasn’t been too bad.