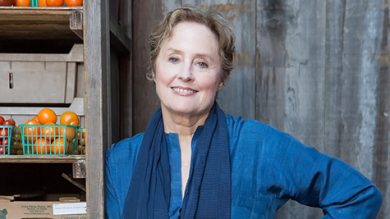 On June 1, Penguin Random House will publish We Are What We Eat: A Slow Food Manifesto, a new book by renowned chef and food activist Alice Waters.

That evening, Waters will celebrate the occasion by appearing in a live conversation with bestselling author Michael Pollan to discuss the impact of food and its quality on society and the planet.

The live virtual event is presented by Bookshop Santa Cruz and Extended Session, and co-sponsored by UCSC’s Humanities Institute. 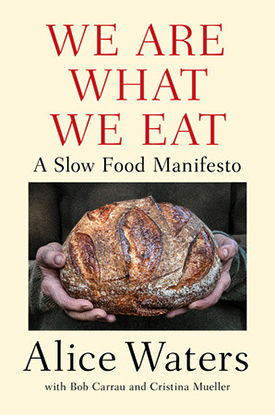 We Are What We Eat details how many of the most urgent problems that we face in today’s world—such as economic disparity, environmental degradation, illness, and social unrest—are all at some level connected to food.

Working with regional farmers over the years, Waters came to the realization that the phenomenon of fast food culture, which prioritized cheapness, availability, and speed, was not only destroying our health, but also dehumanizing the ways we live and relate to one another.

Waters makes the case that by changing the way we eat and abandoning fast food values, we can be empowered to create a different kind of culture that embraces and nurtures values such as biodiversity, seasonality, stewardship, and balance.

She argues that how we choose to eat has the potential for individual and global transformation by shifting our relationship to food.

Waters is executive chef, founder, and owner of Chez Panisse, the Berkeley restaurant that made “farm to table” a household phrase. As vice president of Slow Food International and founder of the Edible Schoolyard Project, she has helped bring food awareness to people of all ages all over the world.

One of the most visible supporters of the organic food movement, she is a pioneer of a culinary philosophy that maintains that cooking should be based on the finest and freshest seasonal ingredients that are produced sustainably and locally.

Waters’s commitment to education led to the creation in 1996 of The Edible Schoolyard at a Berkeley middle school: a one-acre garden, an adjacent kitchen-classroom, and an “eco-gastronomic” curriculum. The program is nationally recognized for its efforts to integrate gardening, cooking, and sharing school lunch into the core academic curriculum.

The success of The Edible Schoolyard led to the School Lunch Initiative, whose national agenda integrates a nutritious daily lunch and gardening experience into the academic curriculum of all public schools in the United States.

Waters has won numerous awards, including the National Humanities Medal, the French Legion of Honor Medal, the Cavaliere of the Italian Republic, and three James Beard Awards. 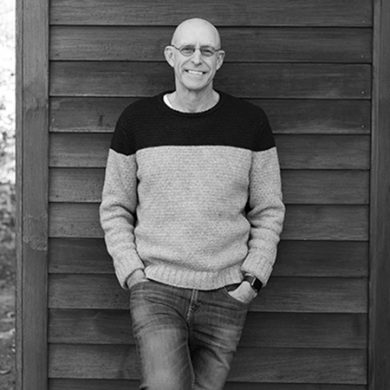 In 2015, UC Santa Cruz awarded her the Foundation Medal at its 50th anniversary celebration “for launching a culinary revolution and teaching us values that transform lives and the world around us.”

Michael Pollan is the author of eight books, six of which have been New York Times bestsellers. The Omnivore’s Dilemma: A Natural History of Four Meals, won the California Book Award, the Northern California Book Award, and the James Beard Award for best food writing. It was also a finalist for the National Book Critics Circle Award.

A contributing writer to the New York Times Magazine since 1987, Pollan has received numerous honors over the years, and in 2010 Time Magazine named him one of the 100 most influential people in the world. His essays have appeared in The New Yorker and Harper’s, as well as in numerous anthologies, including Best American Essays, Best American Science Writing, and the Norton Book of Nature Writing.

Alice Waters will be featured in conversation with Michael Pollan on Tuesday, June 1, at a live virtual event, beginning at 6 p.m., to celebrate the publication of her new book “We Are What We Eat: A Slow Food Manifesto.” This event is presented by Bookshop Santa Cruz and Extended Session, and co-sponsored by UCSC’s Humanities Institute. Tickets are now on sale.