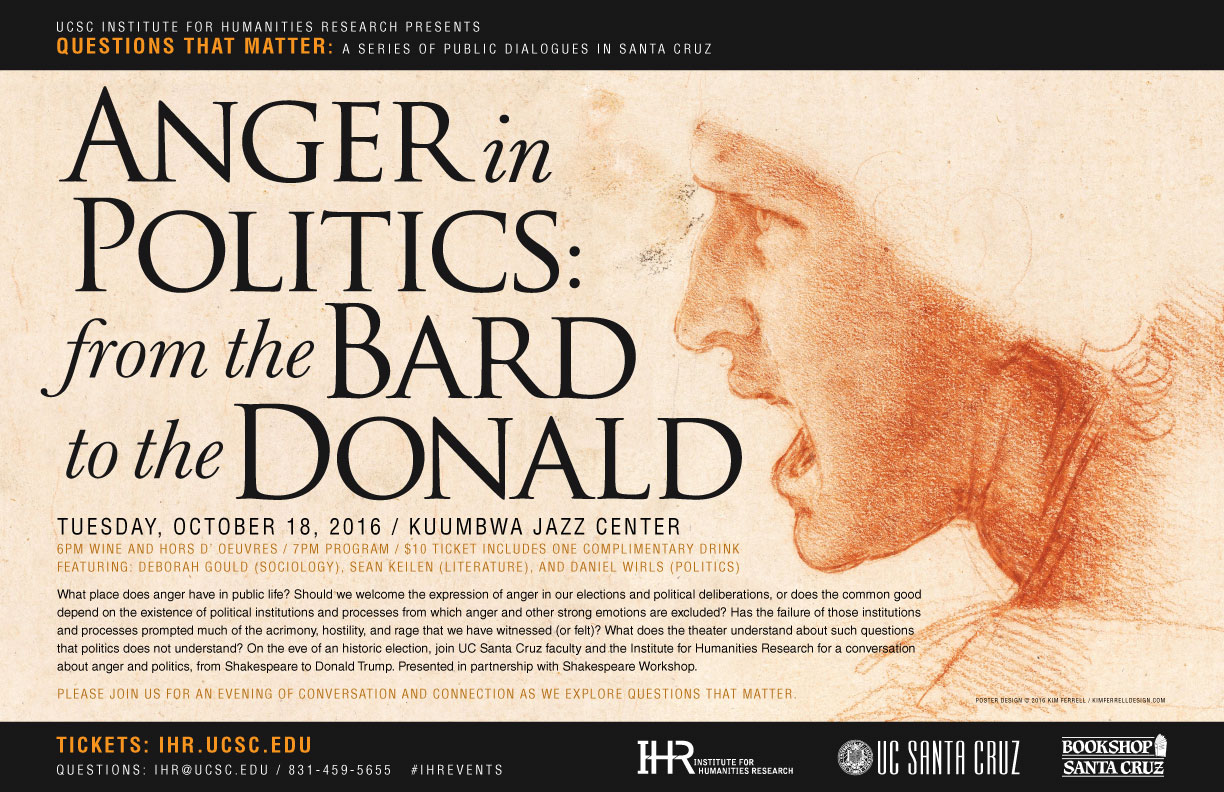 Questions That Matter: “Anger in Politics: From the Bard to the Donald”

Presented by the Institute for Humanities Research and Shakespeare Workshop

What place does anger have in public life? Should we welcome the expression of anger in our elections and political deliberations, or does the common good depend on the existence of political institutions and processes from which anger and other strong emotions are excluded? Has the failure of those institutions and processes prompted much of the acrimony, hostility, and rage that we have witnessed (or felt)? What does the theater understand about such questions that politics does not understand? On the eve of an historic election, join UC Santa Cruz faculty and the Institute for Humanities Research for a conversation about anger and politics, from Shakespeare to Donald Trump. Presented in partnership with Shakespeare Workshop.

Questions That Matter: “Anger in Politics: From the Bard to the Donald” from IHR on Vimeo. 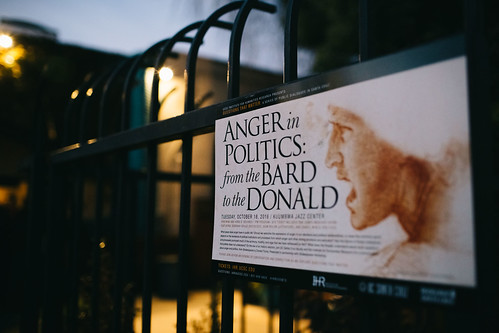 Questions That Matter: A Series of Public Dialogues in Santa Cruz

This series brings together UC Santa Cruz scholars with community members to explore questions that matter to all of us. We invite you to join us on October 18, 2016 at the Kuumbwa Jazz Center for “Anger in Politics: From the Bard to the Donald.” Deborah Gould is an Associate Professor of Sociology at UC Santa Cruz (and affiliated faculty in Feminist Studies, History of Consciousness, and Politics). She is interested in political emotion, from hope and anger to cynicism, resignation, and despair. She is currently working on her second book, Emotional Terrains of Activism: Appetites, Encounters, and the Not-Yet of Politics. Sean Keilen is Associate Professor of Literature at UC Santa Cruz, Provost of Porter College, and Director of the Humanities Research Cluster, Shakespeare Workshop. He studies Shakespeare and the history of criticism. A former Guggenheim Fellow, he is writing Shakespeare and the Future of Literary Education, a book about reading, the vocation of teaching, and the importance of the humanities and arts. Daniel Wirls is Professor of Politics at UC Santa Cruz. Among other works he is author of The Federalist Papers and Institutional Power, Irrational Security: The Politics of Defense from Reagan to Obama, and The Invention of the United States Senate. He is currently working on a critique of the Senate and an analysis of the consequences of post-9/11 policy choices on the structure of American politics.

Please join us for an evening of conversation and connection as we explore questions that matter.

A public humanities series developed by UCSC Institute for Humanities Research (IHR) and the community of Santa Cruz – bringing together in conversation two or more UC Santa Cruz scholars with community residents and students to explore questions that matter to all of us. The series is a part of a strategic initiative of the IHR to champion the role and value of the humanities in contemporary life. At the University of California Santa Cruz, we understand that the humanities are a crucial element of any first-rate liberal arts education. Indeed, what distinguishes the best universities in the United States is the fact that the humanities are an integral part of their core curriculum, along with the arts and sciences. The series is designed as a lecture and conversation, with plenty of time built in for participant questions and answers.