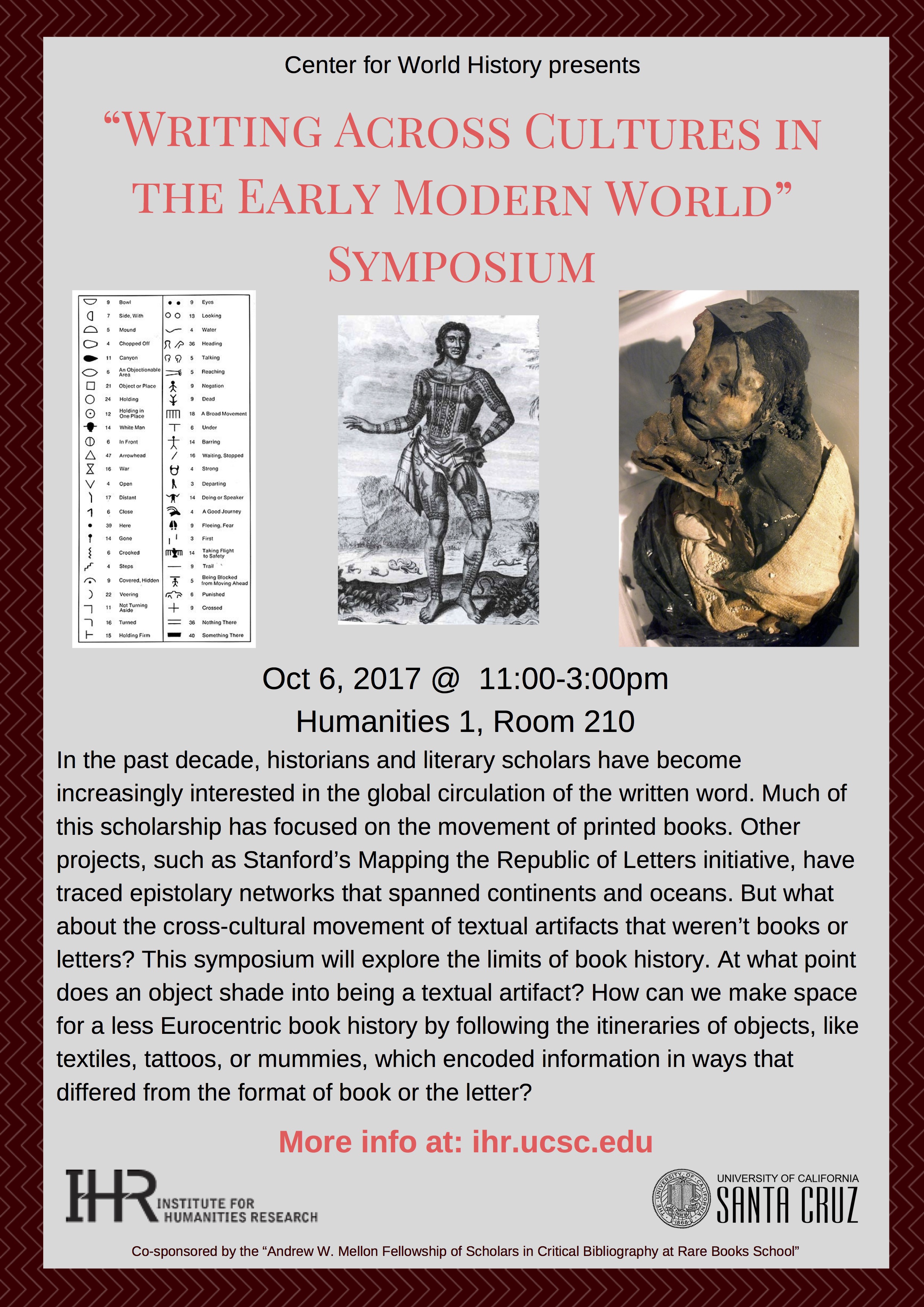 “Writing Across Cultures in the Early Modern World” Symposium

“Writing Across Cultures in the Early Modern World”
In the past decade, historians and literary scholars have become increasingly interested in the global circulation of the written word. Much of this scholarship has focused on the movement of printed books. Other projects, such as Stanford’s Mapping the Republic of Letters initiative, have traced epistolary networks that spanned continents and oceans. But what about the cross-cultural movement of textual artifacts that weren’t books or letters? This symposium will explore the limits of book history. At what point does an object shade into being a textual artifact? How can we make space for a less Eurocentric book history by following the itineraries of objects, like textiles, tattoos, or mummies, which encoded information in ways that differed from the format of book or the letter?
Guest Speakers: Chris Heaney – University of Texas, Austin – “Dead Archives: Inca Bodies as the Lost Founding Texts of Peru?”   – In 1989, the social anthropologist Paul Connerton highlighted how Western scholarship privileges inscriptive   practices of history—which write, photograph, record, and trap information “long after the human organism has   stopped informing”—over incorporative practices: gestures, ceremonies, rituals that invoke and transmit the past and   its continuities via the human body. Inspired by Connerton, the cultural anthropologist Frank Salomon subsequently   observed that when the Spanish invaded in 1532, they encountered a Peruvian dead that “transmit[ted] both kind of   messages”: a society headed by the ancestral mummies of Inca emperors and other pre-conquest Andeans who were   seated, dried, and dressed as if they were alive—arms posed in authoritative gesture—and paraded in ceremonies   whose commemorative ballads further made legible their sanctity, nobility, and orders of descent and importance. This   paper explores how the earliest Spanish managed their illiteracy when faced with those mummies’ inscribed   historicity; it shows how they moved from attempting to inscribe the corpse of Atahualpa as a founding text of   Christian  Peru, to outright confiscating what we might call the ‘banned books’ of the Inca dead, the mummies   themselves, 27 years after the conquest begun. While other scholars have asked what the loss of those mummified   ancestors meant socially and religiously for the Inca and other Andeans, this paper ultimately asks what their loss as ‘texts’ meant for the foundational histories of Peru written by both Spaniards and Incas between 1533 and the early seventeenth century, many of which attempted to reproduce the absent and illegible imperial bodies at their core. Mairin Odle – University of Alabama – Marin Odle is Assistant Professor of American Studies and teaches courses in Native American Studies and early American culture. Her research interests include   Native-newcomer relations, the history of the body, and how selfhood, experience, and identity were   narrated in early America. Her current book project investigates how cross-cultural body modification in   early America remade both physical appearances as well as ideas about identity. Focusing on indigenous   practices of tattooing and scalping, the book traces how these practices were rapidly adopted and   transformed by colonial powers, making them key sites of cultural contestation.

Professor Odle’s talk “Reading Their ‘Marckes’: English Perceptions of Tattooing as Indigenous Literacy” explores early English interpretations of Native American tattooing, focusing on writing and art produced in response to late sixteenth-century voyages. Artists and scholars on such expeditions paid close attention to bodily appearance and inscription. Lines marked on Native bodies were then transferred—and translated—as lines within European books. Colonial observers conceived of indigenous tattooing as an important communication system, and one that they hoped to employ for their own goals—even as they simultaneously claimed that Natives were people with “no letters”.

Hosted by the Center for World History

Co-sponsored by the “Andrew W. Mellon Fellowship of Scholars in Critical Bibliography at Rare Books School”