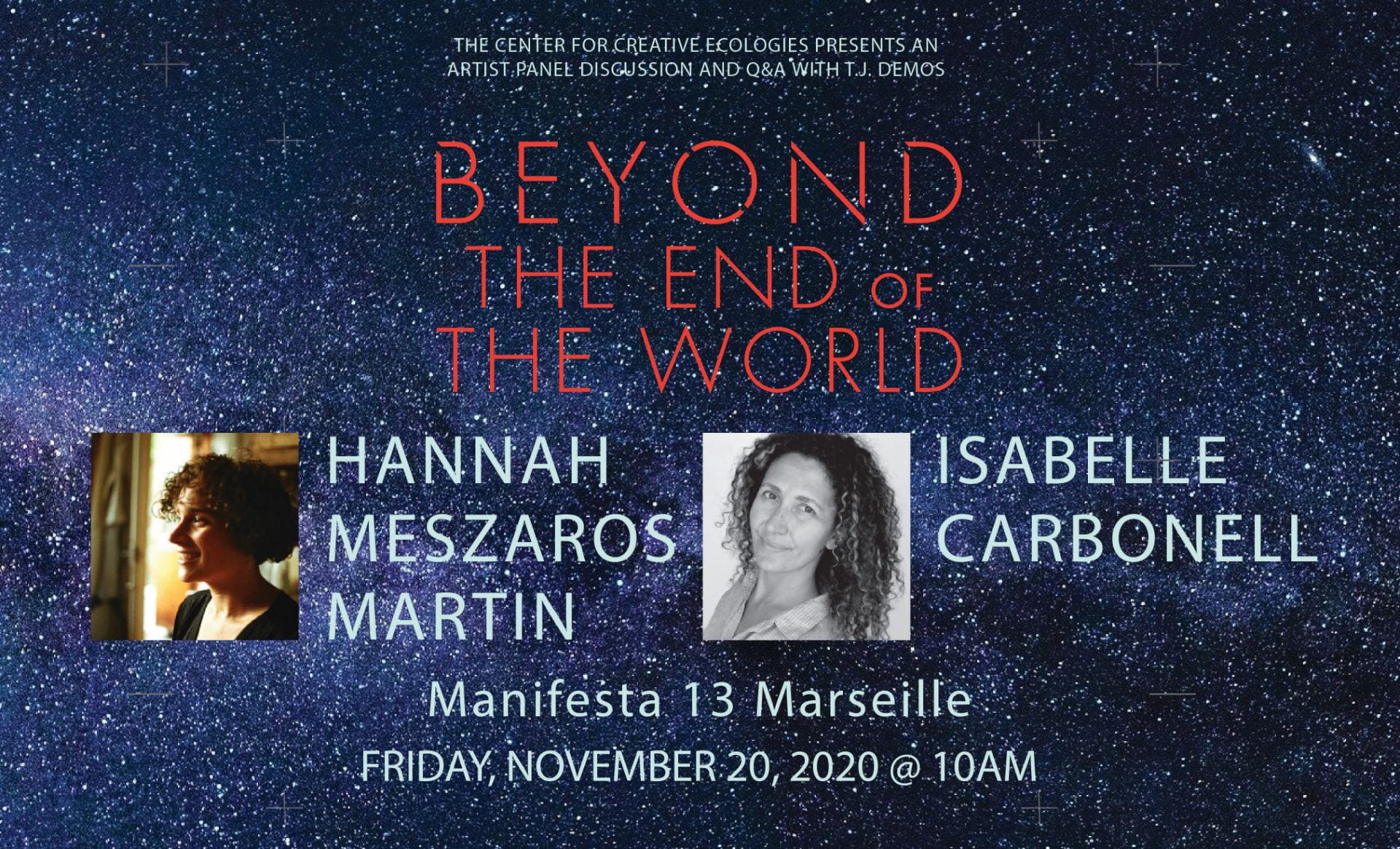 Beyond the End of the World: Manifesta 13 Artist Talk

War ecologies call forth not just mutuality but collapse, survival within violence. Conflict involves corporate extraction and militarised assaults on environments and environmentalists, while multispecies life and coexistence fall under grave threat. In its curatorial presentation, the Center for Creative Ecologies offers two artistic case studies asking what kind of pluriverse is possible in the face of different kinds of socioecological violence? The first study addresses the criminalisation of nonhuman life in Putumayo, southern Colombia by Hannah Meszaros Martin; the other considers sci-fi surrealism and extinction in Mar Menor, a saltwater lagoon in southeastern Spain, by Isabelle Carbonell. These comprise part of the Center’s ongoing research project Beyond the End of the World, which seeks out spaces of hope emerging from geographies of despair. War ecologies identify not only neoliberal enterprises using climate breakdown to introduce authoritarian politics, but also struggles – human and more-than-human – for ways to transcend the forces of socio-economic inequality and politico-environmental calamity.

Please join us for a panel discussion and Q&A with the Center for Creative Ecologies artist and curatorial team Isabelle Carbonell, Hannah Meszaros Martin, and T.J. Demos. The team will be discussing their latest exhibition at Manifesta 13 Marseille the European Nomadic Biennial.

Hannah Meszaros Martin is an artist, writer, and recent PhD graduate of the Centre for Research Architecture, Goldsmiths, University of London. She is a researcher in Forensic Architecture, a European Research Council funded project, which she has been a member of since 2012. With Forensic Architecture, she has exhibited at the House of World Cultures (Berlin), MACBA (Barcelona) and MUAC (Mexico City), and contributed to the book FORENSIS (Sternberg, 2014). She has exhibited solo work in Medellín, London, and documenta(13). She has published with Open Democracy, Third Text and Different Skies, a publication that she co-founded in 2012.

Isabelle Carbonell is an award-winning documentary filmmaker and a PhD Candidate at the University of California, Santa Cruz in Film and Digital Media, thinking through a cinema of the anthropocene, and how we think on multiple possible futures in this time of ecological crisis. Her work lies at the intersection of expanded documentary, environmental justice, invasive species, eco-disasters, and experimental ethnography. Her scholarship has been published in the Internet Policy Review, Conexión Journal, and the Cultural Anthropology Journal. Recent completed film works include: The River Runs Red (2018), The Blessed Assurance (2018) and, The Camel Race (2019).

This event is part of the Beyond the End of the World symposium through the Center for Creative Ecologies in collaboration with The Humanities Institute at UC Santa Cruz.