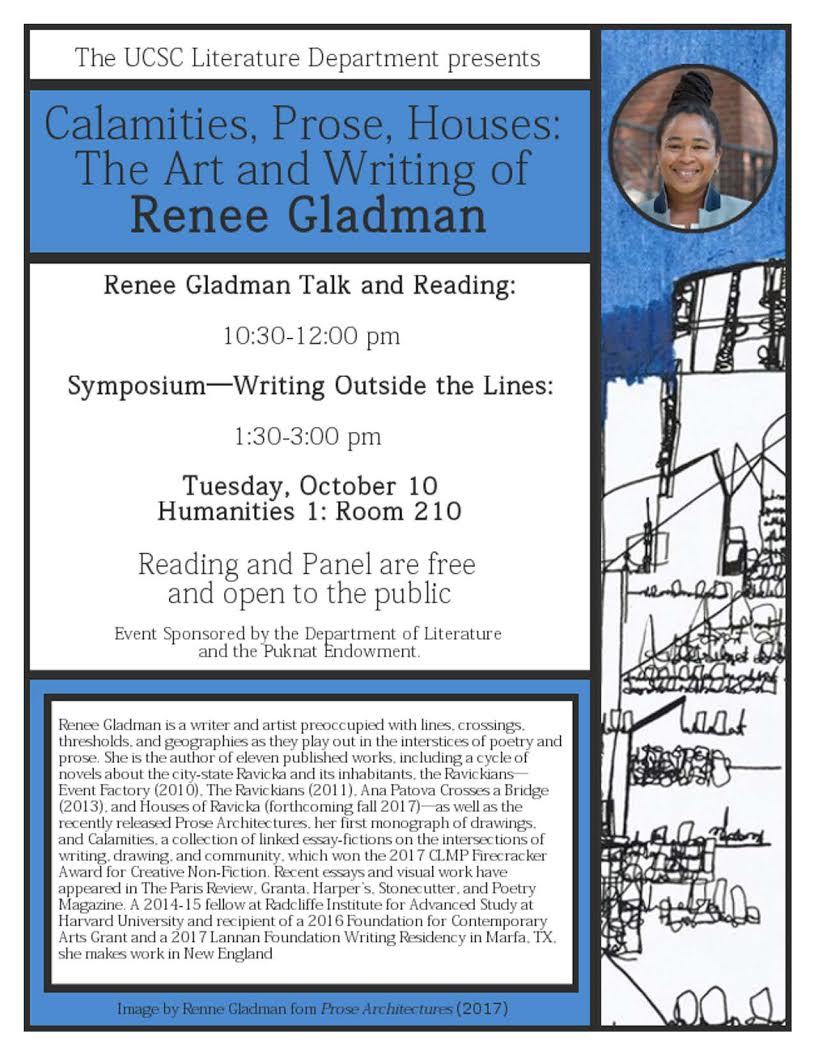 Calamities, Prose, Houses: The Art And Writing of Renee Gladman

Please join us next Tuesday October 10th for a Creative/Critical symposium on the art and writing of Renee Gladman–featuring a talk and reading by the author from 10:30-12 in Hum 1 210. There will also be a later panel on Gladman’s work from 1:30-3 in Hum 1 210 featuring Mary Wilson, Cathy Thomas, and David Buuck.

This event is part of Communal Presence: New Narrative Writing Today, a joint UC Santa Cruz and UC Berkeley conference on the legacy of New Narrative–a literary movement emerging from the Bay Area in the 1970s. For a full schedule of UC Berkeley readings, film showings, walks, and talks, see: https://communalpresence.com/

Renee Gladman is a writer and artist preoccupied with lines, crossings, thresholds, and geographies as they play out in the interstices of poetry and prose. She is the author of eleven published works, including a cycle of novels about the city-state Ravicka and its inhabitants, the Ravickians—Event Factory (2010), The Ravickians (2011), Ana Patova Crosses a Bridge (2013), and Houses of Ravicka (forthcoming fall 2017)—as well as the recently released Prose Architectures, her first monograph of drawings, and Calamities, a collection of linked essay-fictions on the intersections of writing, drawing, and community, which won the 2017 CLMP Firecracker Award for Creative Non-Fiction. Recent essays and visual work have appeared in The Paris Review, Granta, Harper’s, Stonecutter, and Poetry Magazine. A 2014-15 fellow at Radcliffe Institute for Advanced Study at Harvard University and recipient of a 2016 Foundation for Contemporary Arts Grant and a 2017 Lannan Foundation Writing Residency in Marfa, TX, she makes work in New England.

​This event is sponsored by the Department of Literature, Living Writers, and the Puknat Endowment.