This talk outlines China’s trajectory of commodification and the counter-movements by state and society in the past quarter century. Unpacking the class specific dynamics and experiences of precarization, I discuss how the commodification of land, labor, housing and the environment has triggered collective struggles by farmers, workers and the middle class. To maintain social stability, the Chinese state has responded, on the one hand, with new social protection policies of uneven effectiveness, and on the other, a practice of “buying stability” which unwittingly commodifies state authority and citizen’s rights, sowing seeds of precariousness in the regime’s authoritarian governance.

Lee is author of Against the Law: Labor Protests in China’s Rustbelt and Sunbelt (2007), and Gender and the South China Miracle: Two Worlds of Factory Women (1998). Her edited and co-edited books include From the Iron Rice Bowl to Informalization: Markets, Workers and the State in a Changing China (2011); Reclaiming Chinese Society: New Social Activism (2009), Re-envisioning the Chinese Revolution: Politics and Poetics of Collective Memory in Reform China (2007) and Working in China: Ethnographies of Labor and Workplace Transformation (2007).

She is currently working on two book manuscripts. One is on forty years of state and society relation in China, and the other on Chinese investment in Zambia. 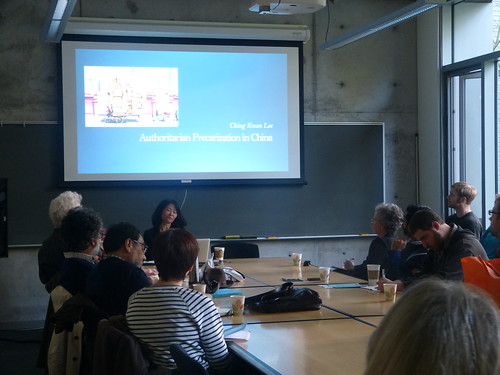