A spatial shift has been taking place in global capitalism in the last few decades, in the form of declining importance of the older advanced capitalism and the rising importance of “emerging economies.” The most dramatic representation of this shift is that China has recently overtaken US as the largest economy in the world. For the first time, capitalism is expanding into countries with very large populations such as China, India and Indonesia. The rising consumption in these economies is sharpening the global ecological crisis.

Pritam Singh has a doctorate in economics from University of Oxford and is currently a Professor of economics at Oxford Brookes University, Oxford. He focuses on the sustainability implications of global capitalism, and Indian capitalism with emphasis on decentralization and human rights. His two most recent books are Federalism, Nationalism and Development: India and the Punjab Economy, and Economy, Culture and Human Rights: Turbulence in Punjab, India and Beyond.

This talk is part of the series “What is To Be Done? Organizational Forms and Political Futures,” organized by:
The Crisis in the Cultures of Capitalism Research Cluster and the Institute for Humanities Research, with the cosponsorship of the Literature, Sociology, Anthropology, and Politics Departments; Stevenson, Cowell, and Porter Colleges; and the Vice Chancellor for Research. 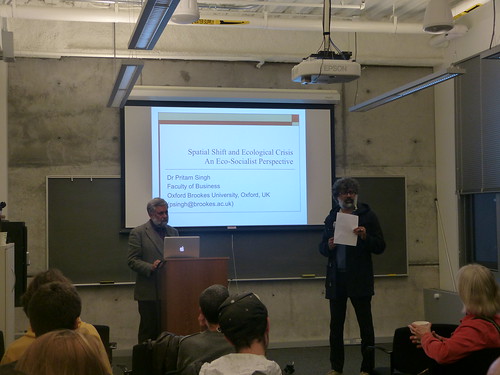