The Hindustani Association of the Pacific Coast, better known as the Ghadar Party, was a game-changing development in Indian history. Ghadarites called for and attempted the overthrow of British colonial rule in India during WWI, seeking a caste-free, secular and independent Indian nation. Ghadar was overwhelmingly initiated by and composed of Sikh laborers from the North American West and became a worldwide movement drawn from people of all castes and religions. San Francisco was home to the movement’s public office and its weekly newspaper, Ghadar, and has often been logged as the movement’s birthplace, especially by historians of the North American West. But remote Astoria, Oregon holds this distinction. Drawing on Indian historical accounts, oral histories and Oregon archival materials, Ms. Ogden both repopulates the East Indian community in Oregon and traces reasons for and key moments in Ghadar’s seemingly unlikely genesis there. Her larger interest, however, is exploring the dis-remembering of East Indians in Oregon and the window it provides into the targeting of Arabs, Muslims and South Asians in post-9/11 America.

Johanna Ogden is an independent historian and activist from Oregon. In 2013 she initiated and was the consulting historian for Astoria’s two-day Ghadar Party Centenary Commemoration and in 2014 participated in an international conference on Ghadar in Chandigarh, Punjab. Her most recent publications include the award-winning “Ghadar, Historical Silences & Notions of Belonging” Oregon Historical Quarterly, Summer 2012; “Ghadar’s Oregon Roots,” The Ghadar Movement: Background, Ideology, Action and Legacies (Punjabi Uni: 2013). She is presently writing a book about Ghadar’s roots in Oregon for the University of Washington Press. 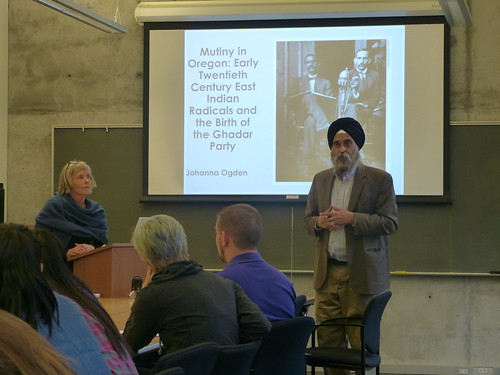