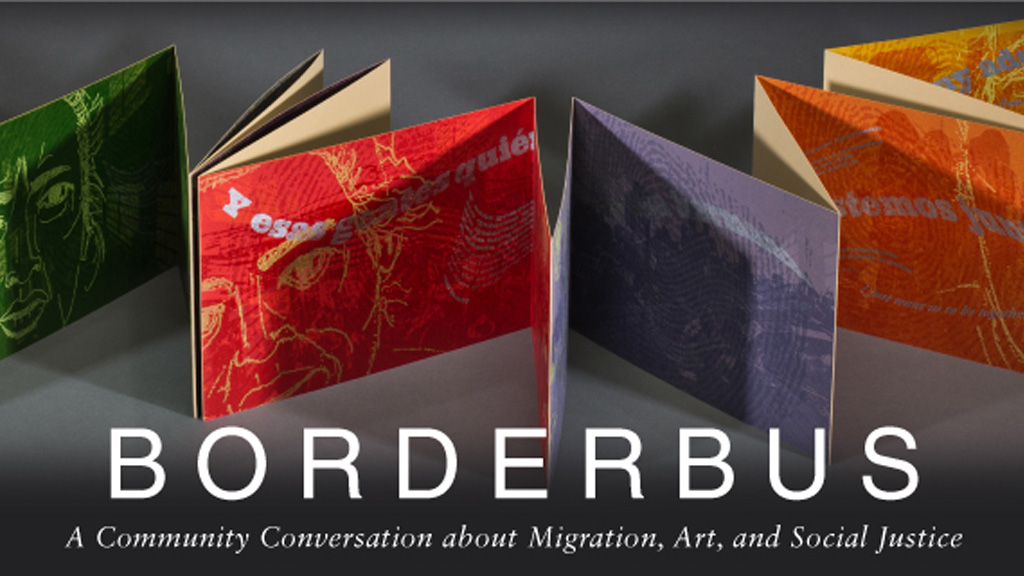 Borderbus: A Community Conversation about Migration, Art, and Social Justice – A Conversation between Felicia Rice and Juan Felipe Herrera

Join recent U.S. Poet Laureate Juan Felipe Herrera and Santa Cruz book artist Felicia Rice in an exploration of the powerful role that poetry and art can play in conversations about the pressing issues of immigration, belonging, and home. Herrera and Rice will be joined in this community conversation by representatives of local groups working on social justice and immigration issues, including local filmmaker Brenda Avila-Hanna. Additionally, attendees will have the opportunity to contribute to a collaborative piece collecting community stories.

Borderbus is a new book project created by Rice in collaboration with Herrera. Herrera’s poem by the same name, which forms the foundation for Rice’s work, features a whispered conversation between two women held at the border between Mexico and the United States on an ICE bus. Rice, whose works build bridges between art forms, cultures, artists/audiences, and technologies, collaborates with visual artists, performing artists, and writers to create book structures in which word and image meet and merge.

Juan Felipe Herrera is the 21st Poet Laureate of the United States (2015-2016) and is the first Latino to hold the position. From 2012-2014, Herrera served as California State Poet Laureate. Herrera is also a performance artist and activist on behalf of migrant and indigenous communities and at-risk youth.

Felicia Rice is a book artist, book arts educator, and sole proprietor of Moving Parts Press in Santa Cruz, CA. Her work has been included in exhibitions and collections both nationally and internationally, from AIGA Annual Book Shows in New York and Frankfurt to the Victoria & Albert Museum.

Kirsten Silva Gruesz is Professor of Literature at UC Santa Cruz. Through her research and teaching she promotes comparative and multilingual approaches to “American” literature and history. She is the author of Ambassadors of Culture: The Transamerican Origins of Latino Writing.