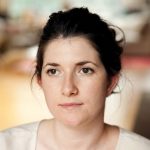 Claire Vaye Watkins is the author of two novels I Love You but I’ve Chosen Darkness (Riverhead Books, 2021) and Gold Fame Citrus (Riverhead Books, 2015). She is also the author of the short story collection Battleborn (Riverhead Books, 2012), winner of the Story Prize, the Rosenthal Family Foundation Award from the American Academy of Arts and Letters, and a Silver Pen Award from the Nevada Writers Hall of Fame. Battleborn was named a Best Book of 2012 by the San Francisco Chronicle, Boston Globe, Time Out New York, and Flavorwire, and a Best Short Story Collection by NPR.org. In 2012, the National Book Foundation named Claire one of the 5 Best Writers Under 35. Her stories and essays have appeared in Granta, One Story, The Paris Review, Ploughshares, Glimmer Train, Best of the West 2011, Best of the Southwest 2013, and elsewhere. 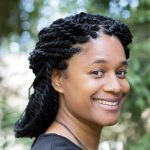 Cathy Thomas is an Assistant Professor at the University of California, Santa Barbara. She has worked for NBC, CBS, Warner Bros. and in film development for Forest Whitaker. She is a script reader for Annapurna Pictures and Skydance Media. Some of her recent research is published in a chapter of Articulating the Action Figure: Essays on Toys and Their Messages; short stories and essays in Positive Magnets Journal; and a forthcoming memory project Wax on, Wax Off. She is Managing Editor of The C.O.U.P Project, a multi-platform dialogic journal engaged in acute critiques of power, privilege, domination, and the violences they produce. She received her Ph.D. in Literature with a Creative/Critical Writing Concentration at the University of California, Santa Cruz, where she was awarded a UC President’s Dissertation Year Fellowship and examined carnivalesque in Caribbean literature with her spec fiction novel Poco Mas.