CELEBRANT: SOUND ACTIONS showcases interdisciplinary writers who deeply engage in various sonic forms, whether the libretto and the operatic, sound and visual art, acoustic music and songwriting, or embodied meditations to explore the possibilities in being attentive to sound, as action and celebrant through writing.  This hybrid series features an array of writers and artists who work across several modes (text, multi-media, meditation, and performance) exploring what happens between sound and/as verbal language, rendering its effects and configurations through poetry, prose, and sound inspired and activated interdisciplinary writing practices. 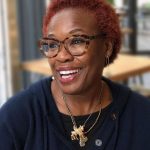 Gina Athena Ulysse is an artist-scholar and Professor of Feminist Studies. In her ongoing crossings and dialogues between the arts, humanities, and the social sciences, she engages in a practice of rasanblaj– the gathering of ideas, things, people, and spirits. Her last book, Because When God is Too Busy: Haiti, me & THE WORLD (2017) was long-listed for the 2017 PEN Open Book Award and received the 2018 Best Poetry Connecticut Center for the Book Award. She was the invited editor of “Caribbean Rasanblaj,” a double issue of e-misférica journal. Her articles, essays, and creative work have been published in Feminist Studies, Gastronomica, Interimpoetics, Liminalities, Meridians, Third Text, etc. She has also performed at The Bowery, The British Museum, Brooklyn Museum, Gorki Theatre, LaMaMa, Marcus Garvey Liberty Hall, MoMA Salon, and the MCA. In 2020, she was an invited artist to the Biennale of Sydney, Australia. More info on: ginaathenaulysse.com