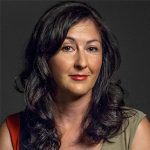 Lara Vapnyar moved from Moscow to Brooklyn in the 1990s. Knowing very little English, she quickly picked up the language and soon began writing in it. She received a Guggenheim Fellowship in 2011. Her work has appeared in The New Yorker, Harper’s Magazine, and Zoetrope: All-Story. She is the author of two short story collections, There are Jews in My House (Anchor, 2003) and Broccoli and Other Tales of Food and Love (Anchor, 2008) as well as four novels, Memoirs of a Muse (Vintage, 2006), The Scent of Pine (Simon & Schuster, 2014), Still Here (Hogarth, 2016), and Divide Me by Zero (Tin House Books, 2019). She lives in New York City with her family.