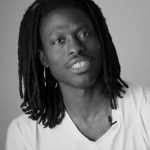 Roger Reeves received an M.F.A. in creative writing and a Ph.D. in English from the University of Texas, Austin.Roger Reeves’s poems have appeared in journals such as Poetry, Ploughshares, American Poetry Review, Boston Review, and Tin House, among others. Kim Addonizio selected “Kletic of Walt Whitman” for the Best New Poets 2009 anthology. He was awarded a 2013 NEA Fellowship, Ruth Lilly Fellowship by the Poetry Foundation in 2008, two Bread Loaf Scholarships, an Alberta H. Walker Scholarship from the Provincetown Fine Arts Work Center, and two Cave Canem Fellowships. In 2012, Reeves received a National Endowment for the Arts Fellowship and a Pushcart Prize for his poem “The Field Museum.” He is an Assistant Professor of Poetry at the University of Illinois, Chicago, and a 2014–2015 Hodder Fellow at the Lewis Center for the Arts, Princeton University. King Me (Copper Canyon Press, 2013) is Reeves’s first book.