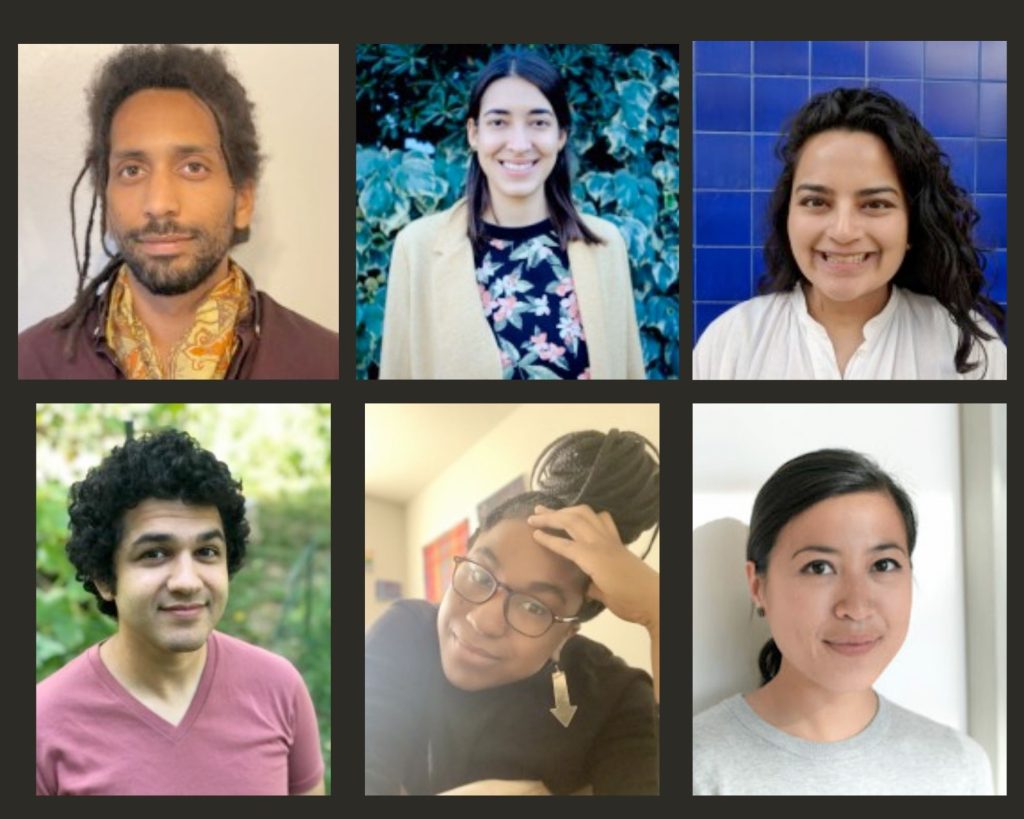 Join the 2021 cohort of the Mellon University Press Diversity Fellowship to hear more about their career trajectories in publishing. The six panelists will discuss topics including their experiences in graduate school, their journeys into the academic publishing world, and their broader experiences with careers beyond the tenure track. A moderated question and answer period will follow the panel presentation.

Chad M. Attenborough, University of Washington Press
Chad M. Attenborough joined the University of Washington Press from Vanderbilt University, where he is a PhD candidate studying black responses to the British abolition of the slave trade in the Caribbean. While completing his research, Chad worked for Vanderbilt University Press as a graduate assistant where his passion for publishing developed in earnest and during which he helped process works for VUP’s Critical Mexican Studies series, their Black Lives and Liberation series, alongside their Anthropology and Latin American list. Chad received his MA from Vanderbilt in Atlantic History and his BA from Bowdoin College in French. His areas of interest include black diaspora studies, imperial and intellectual histories, global migration studies, and critical geographies.

Fabiola Enríquez, University of Chicago Press
Fabiola Enríquez joined the University of Chicago Press after having served as Managing Editor for the Cambridge University Press journal International Labor and Working-Class History. She received her BA in History from the University of Puerto Rico-Mayagüez. She is currently pursuing a PhD in History at Columbia University, where she is writing a dissertation on the intersection between religion and politics in late-nineteenth century Cuba and Puerto Rico. Her interest in publishing comes as a continuation of these academic pursuits, seeing in acquisitions editing a platform from which to facilitate the global dissemination of knowledge and rescue perspectives that have thus far been underrepresented in historical discussions. Born and raised in Puerto Rico, she has been living in Chile for the past two years, and is the proud human to a reformed Chilean street dog.

Suraiya Anita Jetha, MIT Press
Suraiya Anita Jetha is a former contributing editor of the Association for Political and Legal Anthropology’s AnthroNews column. She has extensive experience in academic programming, most recently with the Center for Cultural Studies at the University of California-Santa Cruz. She received a BA in Anthropology from Yale University, an MA in Migration and Diaspora Studies from SOAS University of London, and an MA in Anthropology from the New School for Social Research. She is currently writing a dissertation to complete a PhD in Anthropology and Feminist Studies at the University of California-Santa Cruz. Her research interests include anthropology, science and technology studies, feminist studies, and ethnography.

Robert Ramaswamy, Ohio State University Press
Robert Ramaswamy joined the Ohio State University Press from the University of Michigan, where he is a PhD candidate in American Culture. He recently completed an internship with Michigan Publishing, during which he worked on title selection and user access for the American Council of Learned Societies’ Humanities Ebook Collection (HEB). At HEB, he coordinated with scholars in learned societies across the humanities to include more work from scholars, subfields, and presses that have historically been excluded from “the canon.” His scholarly interests include feminist theory, histories of capitalism, and twentieth-century African American history. He lives in Ann Arbor with his partner, Anna, two dogs, and nine chickens.

Jacqulyn Teoh, Cornell University Press
Jacqulyn Teoh joined Cornell University Press after working as an apprentice at the Feminist Press at CUNY and a part-time acquisitions assistant at the University of Wisconsin Press, where she was a member of UW Press’s Equity, Justice, and Inclusion working group and helped to prepare a demographic survey of authors as a baseline understanding of diversity, representation, and inclusion. She holds a BA from Pennsylvania State University, an MA from the University of Leeds, and a PhD from the University of Wisconsin-Madison. Her dissertation looked at the structures of the contemporary literary marketplace with a focus on Southeast Asian and Southeast Asian American writing.

Jameka Williams, Northwestern University Press
Jameka Williams is a MFA candidate at Northwestern University in poetry. She received her BA in English from Eastern University in St. Davids, PA. After supporting herself as a pastry chef during her graduate studies, she is transitioning into pursuing a career in book publishing, having interned with independent publisher, Agate, in Evanston, IL. Her poetry has been nominated for the Pushcart Prize, and she is a Best New Poets 2020 finalist, published by University of Virginia Press annually. She is currently completing her first full-length poetry collection.

About the PhD+ Workshop Series
Join us for the sixth year of PhD+ Workshops, hosted by The Humanities Institute. We meet monthly to discuss possible career paths for PhDs, internship possibilities, grants/fellowships, work/life balance, elements of style, online identity issues, and much, much more.